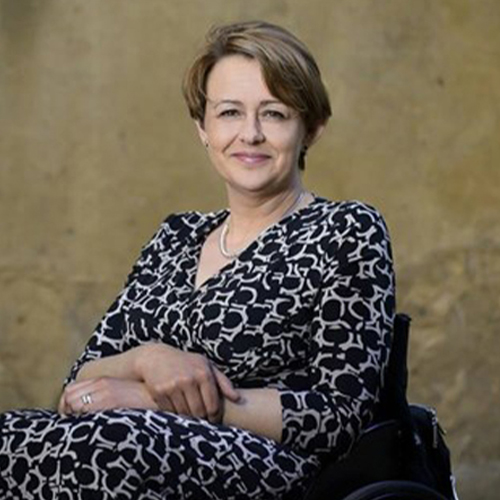 One of Britain's most successful Paralympic athletes, who sits on the BBC board, Baroness Grey-Thompson is a sought-after motivational speaker. A true inspiration to disabled athletes, Tanni speaks with authority on a number of topics including disability rights, welfare reform, and of course sport.

Not only is Tanni Grey-Thompson Britain's most successful paralympic athlete in wheelchair racing, she is an esteemed ambassador for disabled athletes and was awarded the prestigious honour of a DBE in 2005.

At the 2000 Sydney Paralympic Games, Tanni added a brilliant four gold medals to those she accumulated in past Paralympics, winning the 800m, 400m, 200m and 100m. Overall, she has won 11 gold medals, 4 silvers and 1 bronze in four different Paralympics. Tanni also holds the world record in the T53 (the category in which she participates) for the 800m event.

Tanni's interest in athletics began when she was a youngster.  At 15, she won the Junior National Games representing Wales in the 100m.  Having performed at a world class level for over a decade, she has been a consistent medal winner in World Championships. She has won the London Marathon six times between 1992 and 2002.

Tanni is also highly regarded off the track, she was a key part of the BBC’s team of presenters for the London 2012 Olympics and Paralympics, she has appeared on TV programmes such as “Question of Sport”, “This is Your Life” and “Onside”. Tanni is a respected authority on disability sporting issues and a regular television and radio broadcast journalist. She is also in the prestigious position of being a crossbench peer in the House of Lords.

She is an active member of Women Sports Foundation, UK Sports Council, Philip Lawrence Trust Award Panel and the National Disability Council. Tanni is also a Non-Executive Director of the BBC and Chancellor of Northumbria University. She was an active member of UK Athletics, encouraging British youth to take up sports.

Her incisive and well-informed views have made her a very popular conference speaker. Every year, thousands of people enjoy listening to Baroness Tanni speak on the topics of motivation, diversity, overcoming adversity and achievement.

For further information or to book Tanni Grey-Thompson, call us at Speakers Corner on +44 (0)20 7607 7070 or email info@speakerscorner.co.uk

What people said about Tanni Grey-Thompson