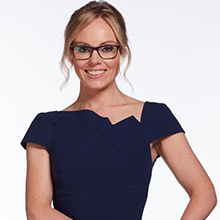 The first female winner of The Apprentice, Michelle Dewberry spent a year working with Lord Alan Sugar before starting her own business. Inspiring others to achieve, Michelle is an example to all aspiring entrepreneurs and business leaders in her rise through the corporate ladder.

Michelle Dewberry is an inspirational businesswoman and conference speaker. Living and breathing her mantra that Anything is Possible, Michelle will put 110% into any task she takes on. As the first female winner of BBC's The Apprentice, she beat competition from over 15,000 people to become Lord Sugar's apprentice.

From a young age, Michelle was determined to create success in her life.  She set herself the target to own her first property by the age of 21 and undertook a number of part time roles to earn money to make this dream a reality.

When she was 18, she cold called Hull’s biggest telecommunications company to request a managerial post.  She was offered an admin position in the IT department which she saw as a great opportunity to ‘get her foot in the door’ and learn.  She rapidly progressed through the ranks, and set herself the goal of becoming an IT Network Analyst. She self-funded and taught herself IT in her spare time until she became a qualified MCP and got the role of Network Analyst.

Michelle was a self-employed consultant from the age of 24, specialising in Business Transformation and Global Outsourcing. Michelle has several years experience across the Telco / ISP sector and dedicated three years of her career to helping companies to relocate elements of their business overseas.

Following this already successful career, in a bid to find a mentor, Michelle entered BBC’s The Apprentice in 2005 where she was the youngest candidate. She was determined to win and fulfilled her goal, becoming Lord Sugar’s apprentice.  After working alongside him for 1 year, Michelle left to re-establish her own consultancy.

Whilst running her own consultancy, Michelle also supports various business initiatives up and down the country and undertakes a lot of charity work. She is an Ambassador for The Princess Trust, a Patron of the Youth Enterprise Scheme and Ambassador for Make your Mark campaign.

At the beginning of 2016 Michelle set up her latest venture Likebees.com, a social buying website which provides families with discounts and offers. This website is maintained alongside her others: chiconomise.com and thedailychic.com.

As a judge on Bebo Big Think Campaign, Michelle helped mentor the 3 lucky young finalists chosen to present their ideas to the Cabinet Office, prior to their presentations. This was the first time that any such project has taken place at Number 10 Downing Street. At a Tory conference fringe meeting, Michelle sat on the panel of a debate entitled 'getting Britain back to work' fellow panellists included George Osborne and Chris Grayling.

Michelle believes in making the most of life and each year sets herself a significant challenge. After being a spectator of the 2006 London Marathon, Michelle vowed to run the following year, although having no previous experience and a poor level of fitness. True to her word, Michelle enrolled alone and completed the 2007 London Marathon and did so in an amazing 4 hours 33 minutes raising funds for the NSPCC and Wellchild charities. She also competed in the 2009 London Marathon.

The business woman has strong opinions on current business and economic matters and consequently is frequently asked to comment on matters in a variety of national media outlets. This has led her to a regular position as a Sky News presenter, host of The Pledge and she is called upon to comment on several political shows including Question Time, This week and Daily Politics. Michelle also writes columns for Closer and The Sun and has penned her own autobiography.

Michelle is a prominent speaker covering topics ranging from business through to motivation and inspirational talks. She has spoken at a large number of corporate, charitable and social enterprise functions as both a keynote and after dinner speaker.

What people said about Michelle Dewberry