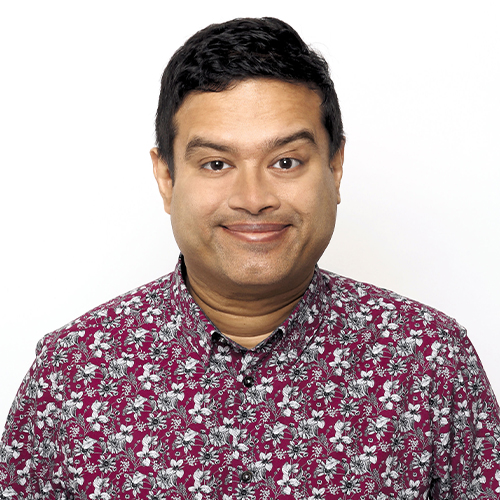 Paul Sinha is a qualified GP and international stand up comic of many years standing, having performed in all major comedy clubs in the UK, as well as abroad. He is an avid 'quizer', best known for his role on 'The Chase' as well as an excellent awards host.

After turning to stand-up as a form of stress relief during his medical studies, Paul Sinha became the only practising GP to be nominated for one of Edinburgh's comedy awards.

Performing continued to be stress relief from Paul's work as a locum in the East End of London, whilst at the same time his experiences on the NHS frontline became a great source of material.

Paul's wonderfully relaxed, friendly story-telling style combines wry observations on life and the world with beautifully crafted one-liners, along with a fund of anecdotes from his experiences with patients and bureaucracy.

A lifetime of curiosity and learning informs Paul's comedy but now also ranks him as one of the UK’s finest quizzers. Not withstanding his role on ITV's The Chase, Paul is now a familiar voice on radio with appearances on Radio 4's Just A Minute, The News Quiz and on BBC Radio 5 Live's Fighting Talk. Paul has his own Radio 4 series 'Paul Sinha's History Revision' which won the Rose d'Or for radio comedy in 2016. Paul has also appeared on television on BBC's QI and Would I Lie to You? and as a competitor on Taskmaster.

A quiz obsessive (and the UK's 22nd best quizzer) Paul also realised a life-long dream by appearing on special editions of both University Challenge and Mastermind. As well as participating in televised and pub quizzes, he also writes and hosts them. In addition, Paul made headlines when he offered Gordon Brown some tips on how to keep his jokes fresh.