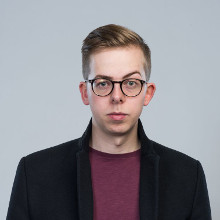 Brimming with punchy one-liners and rapid freestyle raps, Chris Turner is a talented comedian and the founder of improv troupe Racing Minds. He is now one of the best up-and-coming comics in the UK, having performed numerous sell-out festival shows and at corporate events. Journeying to other continents, Chris’s assured stage presence and unscripted combinations of wit and wordplay continue to entertain on the international circuit.

Inspired by his love of hip-hop from the age of 12, Chris made a name for himself in entertainment by artfully weaving together everything from gangsta beats to natural disasters to smurfs in unscripted and inventive amalgamations.

A founding member of improv troupe Racing Minds, the comic and rapper has free-styled his way through several sell-out runs at the Edinburgh Fringe; heavily applauded for their show Aaaand Now for Something Completely Improvised, while touring Perth Fringe World, his show XXV (2015) was nominated for Best Comedy, their popular 50s style radio comedy The Wireless Podcast has also been a hit with hundreds and thousands of SoundCloud subscribers.

Chris continues to entertain with the second half of comedy duo Alice Winn; named Chrysalids they bring together their improvisational skills to amuse, unravel and recreate a stream of quirky characters and imagined situations from two simple suggestions.

As well as racking up millions of views on YouTube, Chris has headlined for 1.1 million Dutch comedy fans on The Comedy Factory (RTL4's flagship stand up show) and appeared live on BBC Radio Two.

In the UK corporate market, he is a favourite with football clubs, having performed at many end-of-season parties, supporters' dinners, and player of the year awards for multiple Premiership teams.