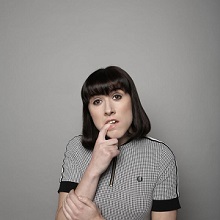 Maisie Adam is a young female comedian, hailing from Yorkshire. Her self-deprecating wit and endearing personality are a perfect fit for any corporate event.

Maisie Adam is a young female comedian, hailing from Yorkshire. Having only started on the circuit in 2016, her anecdotal material and self-deprecating charm have quickly won her praise up and down the country.

After previewing her first stand-up show “Living On The Edge” at the Ilkley Fringe, she then took the debut show on tour across the UK. After receiving positive reviews from runs at Bath Comedy Festival, Hastings Fringe Comedy Festival, Southend Fringe and Guildford Fringe, the show was nominated for Best New Comedy at the 2017 Brighton Fringe. Later that year, she won the nationwide competition, So You Think You’re Funny? at the Edinburgh Fringe Festival.

Maisie has since guested on The Stephen K Amos Talk Show, SkyArts and BBC Radio 2. She has appeared alongside Josie Lawrence and Dan Antopolski as well as opening for Lloyd Griffith, Bec Hill and Gavin Webster.

Maisie Adam is available for comedy cabaret sets. Her self-deprecating wit and endearing personality are a perfect fit for any corporate event.