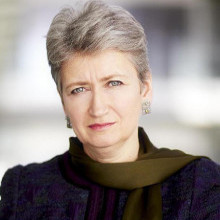 Lindsey Hilsum is Channel 4 News' International Editor. Lindsey writes regualarly for the Sunday Times and the Guardian. As a journalist who has covered many conflicts of the past decade, Lindsey is adept at covering tough topics, and is an excellent facilitator.

Lindsey Hilsum is the International Editor of Channel 4 News. She is amongst Britain's leading foreign correspondents, having reported from every continent over 20 years. She is also an adept and experienced professional speaker, keynote speaker and conference facilitator.

From 2006 – 8, she headed the Channel 4 News China Bureau, covering the uprising in Tibet, the Sichuan earthquake and the Beijing Olympics. She covered the 2003 war in Iraq from Baghdad, and the 1999 NATO attacks on Serbia from Belgrade. She was embedded with a frontline marine unit during the 2004 US assault on Falluja.

Previously, she specialised in Africa, spending extended periods of time in Zimbabwe and the Democratic Republic of Congo. In 1994, she was the only English-speaking correspondent in Rwanda when the genocide started.

Lindsey began her career as an aid worker, first with Oxfam in Latin America and then with UNICEF in East Africa. She lived in Kenya for seven years, primarily as a reporter for the BBC and the Guardian. She has contributed to the literary magazine Granta, written a fortnightly Letter from China for the New Statesman and writes regularly for the Observer and the Sunday Times.

She is a stimulating public speaker, and a skilled chair of conferences, seminars and panel discussions, and speaks Spanish and French.

Lindsey Hilsum is the International Editor of Channel 4 News, and is one of the UK's leading foreign correspondents.

What people said about Lindsey Hilsum