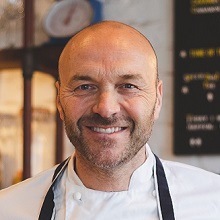 Simon Rimmer is the chef and co-presenter of Sunday Brunch, the Sunday morning show waking up the nation with a mix of chat, current affairs, guests and food.

Simon Rimmer is the chef and co-presenter of Sunday Brunch, the Sunday morning show waking up the nation with a mix of chat, current affairs, guests and food.

Simon has a wealth of TV experience, and has appeared across many channels including BBC, ITV, C4, C5 and UKTV.

Following the success of Sunday Brunch, Simon co-hosted an initial 4 part Channel 4 documentary Tricks of the Restaurant Trade, giving insight into the tactics employed by many high end and high street restaurants to entice customers, which followed up with a popular series 2. The show continues to go from strength to strength and is now in it’s third series, proving popular in its slot.

Simon’s popularity really took off when he landed a role on the BBC2 Sunday show – Something for the Weekend, on which Simon cooked and interviewed guests alongside his co host Tim Lovejoy. He has presented and cooked on a variety of shows and his numerous credits include: Win It, Cook It, Meals in Moments, Breaking into Tesco’s, Recipe for Success and This Little Farmer went to Market and Eat The Week.

To add to his talents, Simon has written and published five successful books which continue to sell well. He also regularly contributes to food magazines including Delicious, Olive, and BBC Good Food Magazine and Vegetarian Living.

Simon frequently works with brands on PR campaigns, and corporate events. He is also a favourite at food festivals and demonstrations across the country. He has in the past appeared at BBC Good Food Show and Grand Designs Live, as well as many local and regional events across the UK.

Aside from his hectic filming schedule, Simon is a chef/owner of 9 restaurants in the northwest of England and one in Dubai. Simon’s real passion for food began as a restaurateur and he continues to cook in the restaurants every week, which he enjoys immensely, but also keeps him in touch with the culinary trends of the moment.

Away from television, Simon is a big football fan and he is involved with Manchester City Football Academy teaching young up and coming players about eating, nutrition and cooking at specially designed cookery courses.