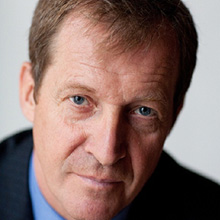 Writer, communicator, author, and strategist best known for his role as former British Prime Minister Tony Blair’s spokesman, press secretary and director of communications and strategy. Alistair Campbell is an extremely intelligent political consultant and campaigner.  Alistair's political background and expertise in economic markets make him well-placed to discuss the future of Britain outside of Europe.

When Alastair Campbell spent 10 years alongside Tony Blair, he absorbed a deep and cogent understanding of the world’s media. Exhibiting an unparalleled knowledge of how the industry works, he helps businesses strategize and enable change  in times of crisis or uncertainty.

With his unique insight and skills, innovative ideas and the magnetism with which he delivers them, Alastair has become one of the world’s most sought-after keynote speakers.

Born in Yorkshire, Alastair studied modern languages at Cambridge University, during which times he busked around the world with his bagpipes, as well as taking his first tentative steps into journalism, publishing articles about sex in Forum magazine.

His formal training came with the Mirror Group on local papers in the West Country, and then he joined the Mirror itself in 1982. After a brief foray into Today, Alastair returned to the Mirror and rose to the dizzy heights of political editor and the paper's political columnist.

When Tony Blair became leader of the Labour party he asked Alastair to become his press secretary. He accepted, and for three years he worked to build the reputation of New Labour and return the Party to power. After the 1997 election success, he became the Prime Minister's Chief Press Secretary and Official Spokesman and eventually Director of Communications and Strategy.

During his tenure in Downing Street, Alastair was integral to every major issue including international crises. Following the resignation of Tony Blair, Alastair’s best-selling memoirs, The Blair Years, divulged details of the inner workings of the Blair Government to a country thirsty for an intelligent insight.

Alastair has written a number of best-selling books, including the instant best-seller Winners and How They Succeed which gives an insight as to what makes a successful person or venture.

Alastair writes extensively on his blog, and comments on the political and cultural topics of the day.

His forthright and honest manner, make Alastair a truly captivating speaker at any event.

What people said about Alastair Campbell