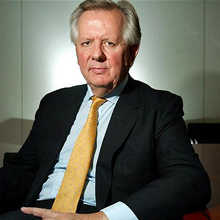 Steven Norris is a Conservative politican, a member of Parliament for over fourteen years and an experienced businessman. Working in government industries of trade and transport, Steven is an expert on corporate trends and new technologies. Advising a new of high-profile industires, Steven's business strategies are highly acclaimed, making him a brilliant keynote speaker.

Steve Norris is a prolific broadcaster and writer with a regular column in Property Week.  He is frequently in demand as an after dinner speaker, keynote speaker and conference chairman.

Steve is a rare beast in having had a successful business career as well as a life in politics. He was a Conservative MP for fourteen years, until he retired in 1997. He was Parliamentary Private Secretary at the Department of the Environment, the Department of Trade and Industry and the Home Office and Minister for Transport in London from 1992-96. He is a former Vice-Chairman of the Conservative Party and contested the Mayoralty of London in 2000 and 2004.

He is a known turnaround specialist who spent many years unravelling Jarvis plc as its Executive Chairman.  His experience is mainly in infrastructure, transport and property. He is Chairman of the National Infrastructure Planning Association and advises major developers on complex planning issues.  He is Chairman of BNP Paribas Real Estate UK and of Soho Estates, Virtus Data Centres and London Resort Company Holdings, Kuwaiti-backed developers of the £3bn London Paramount entertainment resort in north Kent.

In the world of transport Steve has been President of the Motorcycle Industry Association, is a Patron of the cycling charity Sustrans, Vice President of the Institute of Advanced Motorists while also Deputy Chairman of Optare, the Yorkshire bus manufacturer and a Director of San Diego based Cubic Corporation the NYSE quoted managers of the London Oyster card and similar systems worldwide.  He is President of ITS UK, the telematics industry body linked to the worldwide ITS network.   He is now Chairman of Driver Group plc, the AIM listed professional civil engineering services group.  He was senior independent director of ITIS Holdings plc which pioneered real time traffic data and of Speed Check Services which introduced the average speed camera.  Both companies were successfully sold on.

Away from business Steve is a Vice President of the Royal National Institute for the Deaf and a Patron of The Urology Foundation of which he was Chairman for many years.  He is a Fellow of the Royal Institution of Chartered Surveyors, a Companion of the Institution of Civil Engineers and an Honorary Fellow of the Association for Project Management.

Steve is a Founding Partner of Norris McDonough LLP.

What people said about Steven Norris