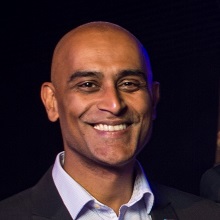 Anu Ojha is Director of the UK’s National Space Academy programme and a Director of the UK National Space Centre, the UK’s largest visitor centre for Space Science and Astronomy. Anu, an engaging, charismatic, informative, approachable speaker excellent at presenting difficult topics in an easily-accessible way, shapes and tailors his presentations and actively participates in panel sessions.

A highly experienced speaker, Anu is engaging, charismatic, informative, approachable and non-stuffy. He is excellent at presenting difficult topics in an easily-accessible way. Always happy to answer questions from the audience, he shapes and tailors his presentation and takes part in panel sessions.

Offering something really rare and unique, Anu can bring items for audiences to see, including a genuine piece of the Moon …. and the only fully operational and pressurisable spacesuit in the UK.

He has spoken at major events including the CBI Dinner 2018 after his success at their Conference 2016, the Innovation Conference 2017, Lloyd’s Register Foundation International Conference 2016, British Embassy Beijing Open Day 2018 for 2,000 invited VIPs, at New Scientist Live 2018 and for schools, colleges and the public.

Anu was appointed to the Council of STFC in 2018: the UK’s Research Council responsible for National and International Facilities and Programmes in Particle Physics, Nuclear Physics, Astronomy and Space Science.

A former Advanced Skills Teacher (AST), Assistant Headteacher and National Lead Practitioner (Physics) for the UK Specialist Schools and Academies Trust, Anu Ojha has led the development and delivery of National and International teacher training and student programmes for the UK Space Agency and ESA. He has worked as a consultant for ESA using data from the SOHO orbiting solar observatory and Mars Express mission and has written and presented numerous international teaching films for ESA targeted for European students, teachers and the general public.

Anu continues to teach Physics on the National Space Academy’s Space Engineering (A level pre-University) and Higher Apprenticeship (undergraduate) courses run in partnership with Loughborough College and the University of Leicester. In 2014 he was appointed OBE for services to science education and in 2018 was invited to join ESA’s Human Spaceflight and Exploration Science Advisory Committee (HESAC) – the senior advisory body to ESA’s Director of Human Spaceflight and Robotic Exploration on all matters concerning scientific exploitation of human spaceflight, microgravity and exploration programmes.

A member of the Space Growth Partnership team formulating the long-term industry, government and academia growth plan for the UK Space Sector, Anu is the lead for Skills, Training and Education in the UK Government’s programmes of strategic collaboration in Space Science and Technology with China.

Appointed in 2016 as an Honorary Professor in the Department of Physics and Astronomy at Leicester University, he is a Co-Investigator for the SPLIT planetary geotechnics sampling tool being developed by the University for use on future Mars exploration missions and was Principal Investigator for the Astro Academy Principia experiments conducted by European Space Agency (ESA) astronaut Tim Peake aboard the International Space Station.

Above and beyond: Human Performance and Psychology Anu has a deep interest in human performance and physiological science in extreme environments. Over the last twenty years, he has continued his involvement in high-altitude expeditions, free-diving and scuba diving.

A skydiver with over 1300 jumps, Anu was involved as an independent science analyst for Felix Baumgartner’s Red Bull Stratos stratospheric jump programme and is supporting the development of the Blue Abyss project – to build the world’s largest neutral buoyancy facility in the United Kingdom.

Anu would make an excellent addition to any event and is a frequently sought-after speaker on the corporate circuit.