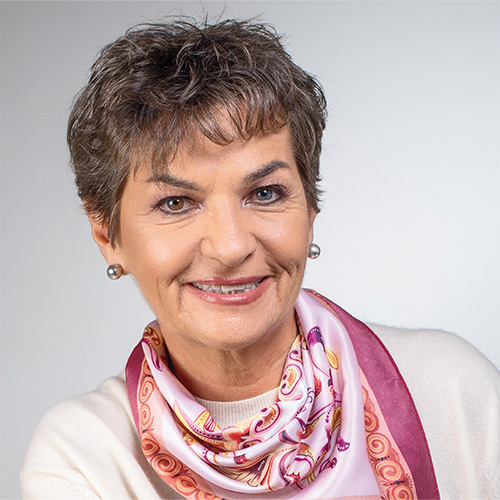 Top authority on global climate change, Christiana Figueres was the Executive Secretary of the United Nations Framework Convention on Climate Change 2010 - 2016. She played a key role in solidifying the Paris Agreement in December 2015 and has been credited with forging a new brand of collaborative diplomacy.

Christiana Figueres was the Executive Secretary of the United Nations Framework Convention on Climate Change 2010 - 2016.

Since then Ms. Figueres has continued to foster rapid action on climate change, She is the co-author of The Future We Choose, The Stubborn Optimist's Guide to the Climate Crisis and co-host of the podcast Outrage and Optimism. She also sits on the Board of ACCIONA and ACCIONA Energía.

During her tenure, Ms. Figueres brought together national and sub-national governments, corporations and activists, women’s groups, scientists and spiritual communities, financial institutions and NGOs to jointly deliver the historic 2015 Paris Agreement on Climate Change. Under this Agreement, 195 sovereign governments decided on a collaborative path to limit future global warming to well below 2°C, and strive for 1.5°C in order to protect the most vulnerable in every nation. For this achievement Ms. Figueres has been credited with forging a new brand of collaborative diplomacy, for which she has received multiple awards.

Assuming responsibility for the international climate change negotiations after the failed Copenhagen conference of 2009, she was determined to lead the process to a universally agreed regulatory framework. Building toward that goal, she directed the successful Conferences of the Parties in Cancun 2010, Durban 2011, Doha 2012, Warsaw 2013, and Lima 2014, before culminating in the historical Paris Agreement of 2015.

Throughout her tenure Ms. Figueres brought together national and sub-national governments, corporations and activists, financial institutions and communities of faith, think tanks and technology providers, NGOs and parliamentarians, to jointly deliver the unprecedented climate change agreement. For this achievement Ms. Figueres has been credited with forging a new brand of collaborative diplomacy.

Ms. Figueres was awarded the Great Cross of the Order of Merit of Germany in 1985. More recently she has been widely recognised for her six-year effort to construct the necessary collaborations to deliver a global legally binding agreement that had previously seemed impossible. She was decorated as Officer in the Order of Orange-Nassau, of The Netherlands, received the Legion of Honor of France, the Grand Medal of the City of Paris, and the National Guayacan Medal from Costa Rica. She received the Ewald von Kleist Award from the Munich Security Conference, the 2015 Medal of Honour from The Guardian, was named 2015 Hero of El Pais newspaper of Spain, received the 2016 Solar Champion Award from California’s Vote Solar, the  Power with Purpose 2016 Award from Devex and McKinnsey, and the 2016 Joan Bavaria Award from CERES.

The Nature Journal of Science listed her first on the list of 2015 Top 10, Foreign Policy Magazine recognized her as the 2015 Global Thinker, and in 2016 Fortune magazine listed her number seven of the World’s 50 Greatest Leaders, the only female Latin American to be listed, and Time magazine included in the top 100 influential leaders of the world.

She has a long trajectory in the field of global climate change, having been a member of the Costa Rican negotiating team 1995- 2009, and having played a number of key roles in the governance of the UNFCCC before formally joining the secretariat.

She initiated her life of public service as Minister Counselor at the Embassy of Costa Rica in Bonn, Germany in 1982. Moving to the USA, she was Director of Renewable Energy in the Americas (REIA) and in 1995 founded the non-profit Center for Sustainable Development of the Americas which she directed for eight years.

She is a graduate of Swarthmore College and the London School of Economics and has been awarded multiple honorary doctorate degrees from academic institutions such as Yale, University of Massachusetts, Georgetown and University of Edinburgh. After decades of living and working abroad, she has moved back to her beloved Costa Rica.  She has two fantastic daughters, Naima and Yihana, fountains of much joy.