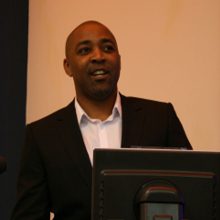 Darren Campbell, an Olympic Gold medallist sprinter was inspired to concentrate on his athletics career after the murder of his friend when he was eighteen. Motivated to overcome adversity in his personal life, Darren Campbell went on to win medals at all four majors. An astute businessman, Darren Campbell is an excellent motivational speaker on a number of topics.

Darren Campbell – Olympic gold medallist and a sprinter who always gave his all and retired having won medals at all four majors – is a motivational speaker  of the highest calibre. His charm, wit and business acumen qualify him to inspire and impress corporate audiences all over the world.

Raised amidst the gang culture of a council estate in Manchester, in a single parent family, Darren never imagined what the world had to offer until he joined an athletics club as a child and made a firm decision to prove those who told him he would never amount to anything, resoundingly wrong.

Fast on his feet, but reckless and unmotivated as an athlete, it was only when his friend was murdered when he was 18 that Darren took his fate into his hands and began to achieve his sporting potential.

At the start of the 90s he almost left athletics for football, but when he was selected for the World Championships in 1993 as part of the relay squad, Campbell knew where his future lay.

By 1996, Campbell had lowered his 100m best to 10.17, but it was during the 4 x 100m relay in the 1996 Olympics when he was involved in failing to pass the baton in the first round and Britain crashed out, that he realised that he would have to raise his game further to ensure the success had had always dreamt of.

At the Olympic Games in Sydney in 2000, Campbell won silver in the 200m final. It was the first time a British man had made the Olympic 200m podium since Alan Wells 20 years earlier in Moscow. Campbell was ecstatic, but still determined to achieve more.

It was the Olympic sprint relay final, where the USA were the clear favourites. But along with the quartet of Jason Gardener, Marlon Devonish and Mark Lewis-Francis, the Brits’ speed and brilliant baton changing took them to victory. It was the crowning moment of Darren’s career.

Darren retired from athletics to pursue his next goal, and as a successful businessman he demonstrates that with passion, a zest for life and boundless energy, you can beat the odds and make it big!

Olympic gold medallist Darren Campbell is an inspirational speaker on motivation and triumph over adversity.

What people said about Darren Campbell