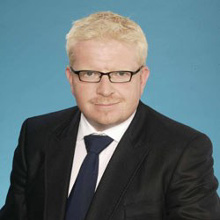 Ellis Watson is the perfect keynote speaker - entertaining, great business message, and with the real experience to back up his content. Former CEO of Simon Cowell's Syco, MD of Mirror Group, and CEO of Celador - Ellis was responsible for global development, formats and commercial strategy at a time when the X-Factor and Got Talent franchises became a fixture in television schedules across the world.

C: £5K - £10K
"Ellis was an inspiring, amusing and engaging speaker. He had done his homework and knew who he was speaking to."
The Institute of Risk Management
Teamwork, Business, Change, Leadership Motivational Speakers, Keynote Speakers

Ellis Watson is an accomplished and witty conference and after dinner speaker.  He speaks on culture change and spreading inspiration and is suitable for a wide range of audiences.

Ellis Watson is Managing Director of Menzies Distribution. Prior to this he was managing Director of Mirror Newspapers, where he was responsible for five national and 240 regional titles. He also turned around the Greyhound Bus system in the US, making it into the successful operation it is today.

He was previously MD at Celador International, in charge of commercial sales of Who Wants to be a Millionaire? Under his wing the phenomenally successful show was licensed in more than 100 countries, with over 130 consumer products.

Ellis was originally Marketing Director for the Sun and News of the World, reporting directly to Rupert Murdoch. He helped reverse a decline in sales and launched a number of cutting edge initiatives, from brand extensions to Books for Schools. He also conceived CurrantBun.com, which quickly became one of the UK’s largest Internet Service Provider.

He talks about how organisational cultures evolve as a result of the quality and diversity of the individuals employed. He is a captivating and hugely entertaining speaker, who can give an insight into the world of journalism, business and the music industry.

He can also entertain audiences with his inspiring tales and witty jokes from his vast experience in industry.

What people said about Ellis Watson