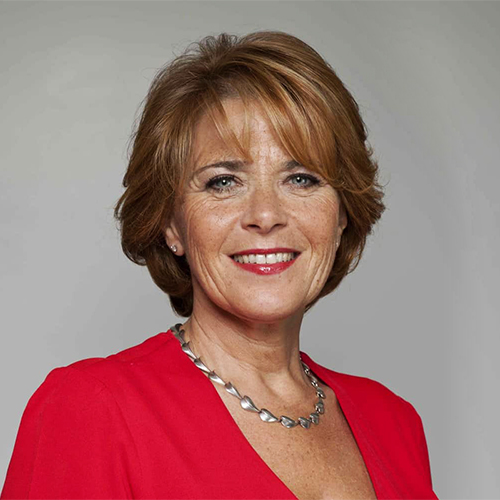 Lorraine Heggessey is famed for being the first ever female BBC One controller and is now a lauded keynote speaker, media consultant, and television producer. Successful and innovative, Lorraine has cemented a strong name for herself within the television industry. Adept at speaking on leadership and innovation Lorraine is a great choice for a corporate event.

Brimming with passion, experience and a wealth of industry tales and valuable management expertise, Lorraine Heggessey was the first female controller of BBC1 . She commissioned Strictly Come Dancing and brought back Dr. Who, as well as reinventing the brand and making it current, vibrant and more popular than ever.

Lorraine’s career in TV began in the 1980s when she became a producer on the BBC's flagship current affairs series Panorama. Working with director Ken Loach on an edition of Hard News, Lorraine found herself investigating the treatment of trade unionist leader Arthur Scargill by The Daily Mirror newspaper and investigative journalist Roger Cook. When Cook declined to be interviewed for the programme, Lorraine made us of one of his own tactics from his television series The Cook Report, "doorstepping" him outside his hotel…

At the BBC Lorraine moved around from news, to children’s to science, and it was her breadth of experience, coupled with her forward thinking management strategies and dynamic vision for the future of the BBC, that propelled her through the ranks. Her strong track record of spearheading radical change, and her legendary shake up of the channel’s schedule and branding turned it into the most watched channel in the UK, overtaking its commercial competitor ITV for the first time.

Lorraine made a name for herself in the history of TV by commissioning Strictly Come Dancing and bringing back Dr. Who – to be named by GQ magazine as the third most influential woman in Britain. At the BBC’s Science Department, she was executive producer of the Bafta award winning series ‘The Human Body’ presented by Robert Winston.

She was crowned Woman of the Year at the Women in Film and Television Awards 2005, and won the Media Award at the Confederation of British Industry (CBI) First Woman Awards and the Bertelsmann Entrepreneur Award.

Although her senior position at the BBC offered Lorraine influence and creative license, it also brought with it a vulnerability to controversy, including the Richard Bacon scandal, where Lorraine had to personally apologise to his fans on air, on his behalf, and announce his departure from Blue Peter.

On a break from her BBC career, Lorraine took the reins of TalkbackThames, where her creativity and talent management skills drove enormous commercial success. She brought in a new team, revitalized the programming portfolio and increased profits by over 50 percent in her first two years.

She was responsible for around 800 hours of television a year, including the UK’s two most popular shows X Factor and Britain’s Got Talent and other hits such as The Apprentice, Grand Designs and QI.

Under Lorraine’s leadership, the company trebled its entertainment output, set up a digital division, launched dozens of new titles and won numerous Bafta and Royal Television Society awards.  It was named Best Independent Production Company at the Broadcast Awards in 2009 and was chosen by freelancers as the place they would most like to work.

What people said about Lorraine Heggessey