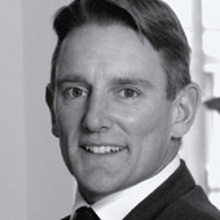 A successful pilot, expedition leader and social entrepreneur, Neil has completed the Explorers Grand Slam including Mt. Everest and skiing to both the North and South Poles. Having made twelve first ascents in Greenland, circumnavigated the UK on a jet-ski and piloted the world’s first road legal bio-fuelled flying car, Neil has a knack of making people believe that they can follow their dreams if they step out of their comfort zone.

Neil Laughton is a highly successful entrepreneur  and adventurer . As a keynote speaker  he helps audiences achieve their dreams by stepping out of their comfort zone.

A former Royal Marine commando, helicopter pilot and SAS officer turned business entrepreneur, Neil's business success grew from humble beginnings; he worked first as door-to-door office equipment salesman before founding a group of companies in the construction industry. He grew the organisation to £40m turnover and then sold the business to a FTSE 100 company.

Whilst building his business , Neil Laughton has organised and led expeditions all over the world. Neil is one of the few Britons to complete the Explorers Grand Slam - climbing the highest mountain on each continent and skiiing to both the Geographic North and South Poles.

An experienced mountaineer, Neil has made twelve first ascents in Greenland and completed the 7 Summits (reaching the summit of Mt. Everest with Bear Grylls  in 1998). Neil was caught at 26,000ft on Everest during the infamous storm of 1996 that killed eight people and injured many more. The season was so notorious, that it became the subject of the 2015 hit film Everest. In 2017 Neil paddle-boarded around Easter Island in the Pacific Ocean, in 2018 he hosted the world's highest black-tie dinner party at 23,000ft on Mt Everest and in 2019 he rode from Lands End to John O'Groats on a Penny Farthing bicycle raising over £100k for charity.

Neil is able to draw on experiences such as these to deliver powerful messages on leadership and teamwork.

Neil loves the challenge of inspiring, organising, fundraising and leading teams on adventurous expeditions. He has trekked unsupported across South Georgia and participated in the Cockleshell Heroes Memorial Expedition. Neil's great sense of fun is reflected in many expeditions too: from piloting the world's first road legal bio-fuelled flying car to Timbuktu (including a flight across the Straits of Gibraltar and across the Sahara Desert); jet-skiing around the UK and playing golf (with an orange ball) at the North Pole. In 2012, Neil led the Scott Memorial Expedition arriving at the South Pole exactly 100 years after Captain Scott. Neil organised a commemorative game of cricket on arrival.

Neil is passionate about sharing his experience, skills and knowledge through his speaking. He is Chief Leader of Project New Horizons, an annual programme of youth development for kids in the care system (NEETs).

Neil is an experienced keynote speaker who engages, entertains and inspires audiences across the world. Neil tailors each talk using awe-inspiring imagery and footage from his expeditions and has powerful messages about risk taking, strategic planning, innovative thinking, effective leadership, cooperative teamwork and determined resilience. His remarkable stories have been shared from the likes of Fitness First to the Bank of England, Mercedes Benz and Xerox.

Neil passionately believes ordinary people can achieve extraordinary results and shares with honesty his failures and struggles as well as the highs. He entertains with humour and modesty as he shares the lessons learnt on expeditions and in business.