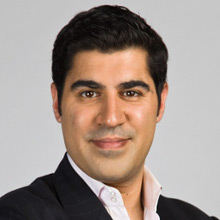 Dr Parag Khanna is a leading global strategist and Managing Partner of FutureMap, a data and scenario based strategic advisory firm. A regular speaker at international conferences, Parag delivers insights and tailored briefings to government and corporate leaders on global trends and scenarios, systemic risks and technological disruptions, and market entry strategies and economic master planning.

Dr Parag Khanna is a leading global strategist and Managing Partner of FutureMap, a data and scenario based strategic advisory firm.

A best-selling author and Senior Research Fellow at the Lee Kuan Yew School of Public Policy at the National University of Singapore, Parag’s expertise is frequently sought after by international governments across the world.

Parag is an intrepid traveller, and having been born in India before growing up in the United Arab Emirates, New York, and Germany, he has travelled to more than 100 countries on all continents. Parag’s global experience has been sought by over 30 governments across Europe, America, Asia, the Middle East and Oceania which included a spell as an adviser to the US National Intelligence Council’s Global Trends 2030 program and on the Singapore government's Committee on the Future Economy. Parag is now a senior advisor to Globality, along with the advisory boards of GeoQuant, Graticule Asset Management Asia (GAMA) and East India Capital Management (EICM).

Parag’s expertise isn’t just sought after by the boardroom. He is frequently interviewed by global media including CNN, BBC, CNBC, Al Jazeera and is a regular TED speaker (with over 2million online views). He also writes for major media publications including the Wall Street Journal, Financial Times, Washington Post, Forbes, McKinsey Quarterly, Esquire and Die Zeit. Furthermore, Parag is a contributing editor to WorldPost and is a member of the editorial board for Global Policy.

A best-selling author, Parag has published a trilogy of books on the future of world order, starting with The Second World: Empires and Influence in the New Global Order (2008), followed by How to Run the World: Charting a Course to the Next Renaissance (2011), Connectography: Mapping the Future of Global Civilization (2016) and concluding with Technocracy in America: Rise of the Info-State, (2017). Parag has also co-authored Hybrid Reality: Thriving in the Emerging Human-Technology Civilization (2012). His books have been translated into more than twenty languages and his latest book is The Future is Asian: Commerce, Conflict & Culture in the 21st Century (2019).

Dr. Khanna holds a PhD in international relations from the London School of Economics, and Bachelors and Masters degrees from the School of Foreign Service at Georgetown University.