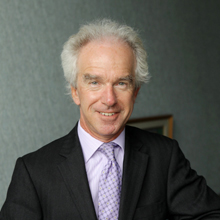 Richard Huntingford has over 30 years experience in executive roles. Having lead an innovative strategy to evolve Heart FM as a consumer branded radio station, Richard is a visionary leader. With great business acumen, Richard makes a great keynote speaker at any corporate event.

At Chrysalis, Richard was instrumental in the development of the company from its origins as a cutting-edge indie record label to a global media and entertainment group which, over the years, encompassed a broad range of businesses including radio, music, television, books and digital media. In the process, the company’s stock market value increased over twenty-fold from £15 million to £375 million in a 10-year period.

Specifically, Richard was responsible for creating and implementing the vision and strategy for a new, brand-led radio business capable of challenging the dominant incumbent operators. His market-led strategy combined organic and acquisition-led growth, the corner-stone for which was HEART FM was founded. The station enjoyed immediate success and further HEART stations soon followed, including the flagship HEART 106.2 which, in a short space of time managed to challenge Capital Radio’s 30-year dominance of the London market place.

The brands were an incredible success, racking up revenues in the millions, the business was bought by Global Radio for £170 million.

In September 2007, Richard was appointed Executive Chairman of Virgin Radio with a brief to develop a new business plan to enable the speedy sale of the business for its owner. In this role, he not only had to manage a challenging sale process (due to the economic downturn and the termination of the Virgin brand license from Virgin Enterprises) but also keep management and staff motivated through a very uncertain period. Richard’s business savvy and people skills led to the successful sale of the business in June 2008 to Times of India for £53 million.

Since, Richard acted as a Non-Executive Director and Chairman sitting on a number of public and private company Boards. He is the Chairman of UTV Media Plc and since 2010 has been Chairman of Princes Trust Trading Limited, the commercial and events arm of the Prince’s Trust, and a Governor of Radley College.

An inspirational business communicator, Richard’s ability to turn companies into profitable empires and his experience as a Chairman on a range of boards means he is an ideal speaker for all kinds of business events.