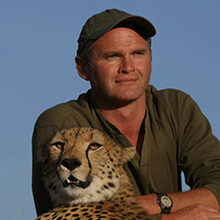 Simon King is an excellent keynote speaker, drawing on his extensive knowledge of the Natural World to provide lively and informative presentations, which can be illustrated by his still library archive, or his film imagery.  He is an experienced motivational speaker in the business arena, deploying fun but factual parallels between the world of commerce and the harsh world of survival in the wild.

Simon King is a great after dinner and keynote speaker. As one of the world’s leading wildlife film makers, Simon has been involved in filming, presenting and producing natural history films for over three decades.  He is a natural and charismatic conference speaker drawing parallels between the natural world and the business world.

Simon has also co presented BBC2's 'Springwatch' and 'Autumnwatch' with Chris Packham and Kate Humble, as well as ‘Britain Goes Wild’ and ‘Wild in your Garden’.

His work as a specialist cameraman includes pivotal roles in productions such as ‘Blue Planet’ [which won him an Emmy Award and a BAFTA for best camerawork] and many of the BBC Natural History Unit’s flagship series, from the Natural World [Cheetahs – fast track to freedom/Meercats – part of the team] to the epic ‘Planet Earth’, the most ambitious Natural History production to date.

Simon’s voice is used repeatedly in Natural History and science related productions and his reputation is one of honesty and integrity, both within the industry and with the audience.

His diverse professional life has taken him from the raging oceans of the South Atlantic, to the deep freeze of Antarctica, from the great plains of East Africa to the deserts of Australia. He has worked in several continents in the most extreme conditions, and has a rich store of tales to tell from each, from the amusing and the inspiring, to the downright frightening!

He is President Emeritus of the Wildlife Trusts and involved with numerous other wildlife charities. Able to speak about his incredible experiences with nature or use his natural charm to host an event, Simon is a brilliant choice for live events.

What people said about Simon King