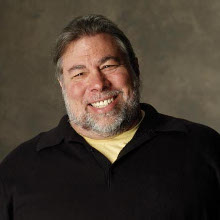 A Silicon Valley icon, popular keynote speaker and philanthropist, Steve Wozniak helped shape the computing industry with his design of Apple's first line of products, the Apple I and II, and influenced the popular Macintosh. Digital genius Steve revolutionised the technological industry with his engineering excellence. The successful tech idol’s entrepreneurial history and relaxed Q&A style would be the perfect addition to a business event.

Apple’s first product line was designed by co-founder Steve Wozniak, whose concepts led to the birth of the iconic Macintosh. A Silicon Valley icon and philanthropist, his ideas have formed the backdrop of the  computing industry .

In 1976 Apple Computer Inc. was born to talented visionaries Ronald Wayne, Steve Jobs and Steve Wozniak. Their concept of a personal computer, with a central processing unit; a floppy disk drive and a keyboard, revolutionised computing all over the world.

An electrical engineering and computer science graduate, Steve won the National Medal of Technology, which was awarded by the US President in 1985 for his achievements at Apple. No innovation award in the world holds more kudos.

His induction into the Inventors Hall of Fame led to Steve winning the prestigious Heinz Award for Technology, The Economy and Employment, and his popularity peaked when he started taking time out from his working schedule to educate the population by speaking at schools around the world.

A businessman, philanthropist and visionary, Steve’s involvement in education and passion for improving the IT services provided by schools, culminated in the Electronic Frontier Foundation, and his adoption of the Los Gatos School District, providing students and teachers with hands-on teaching and donations of state-of-the-art technology equipment.

From 2009 – 2014 he was the Chief Scientist for Fusion-io, since 2014 he has been Chief Scientist at Primary Data. He has published a New York Times best-selling autobiography, iWoz: From Computer Geek to Cult Icon.

The New York City Chapter of Young Presidents' Organisation presented their 2014 Lifetime Achievement Award to Steve Wozniak at the American Museum of Natural History. 2016 saw Steve be announced as the Innovator in Residence at High Point University.

Incredibly intelligent and innovative, Steve is the perfect keynote speaker to talk about how he has influenced the technology industry and how other companies can adopt the same creative and agile attitudes.