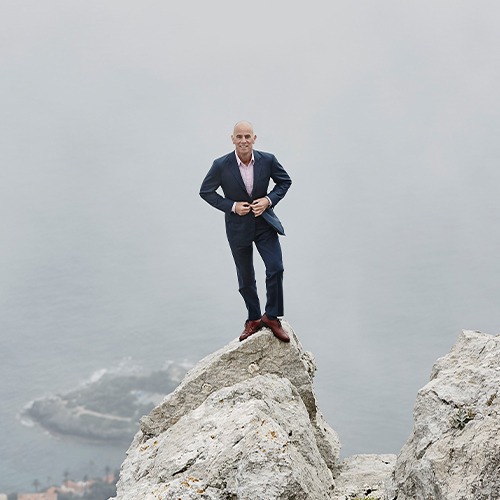 With Intelligent Performance as the foundation of his message, extreme solo climber Thomas Bubendorfer is driven by an inner fire, and the desire to fulfil his personal potential. Through his passion and philosophical outlook, audiences learn about courage; fear; dedication; peak performance; focus and risk-taking.

C: £5K - £10K
"Your message on goal-setting and dealing with crisis and set-backs was perfect. Our colleagues in Europe were as fascinated as we are."
d
Teamwork, Adventure, Adversity, Leadership Webinar and Virtual Event Speakers, Keynote Speakers

Thomas Bubendorfer’ passion for climbing was born in childhood. Raised in an Austrian valley with a mountain on his horizon, he decided to test his limits, and with no safety equipment, weather reports, or previous experience, he tried and tried and eventually conquered his first mountain. These tentative first steps defined him and he learnt to reduce his equipment to a minimum, so that with every climb he fully explores his potential, and uses his most prized attribute – control. He was running marathon distances at the age of fourteen, a discipline that instilled in him a lifelong appreciation of the importance of training and dedication.

At sixteen he became the youngest climber in history to solo climb hard ice routes in the Alps, and a year later he solo climbed ice routes to the summit of Montblanc. By 18 he had conquered the Korshenewskij peak in the Himalayas, and he became famous for breaking his first speed climbing record.

Writing climbing history and setting speed records for the entirety of his career, at the age of 27 Thomas made his first – and only – mistake. He fell 70 feet onto rocks, and had to reassess his entire training strategy, outlook and future prospects. Without the ability to continue with his mountain jogging regime, Thomas had to adapt, and, confronted with his own fallibility, he had to accept that the reason for his mistake was that on that day he was climbing for the wrong reasons – to make money.

Describing the accident as the best thing that ever happened to him, Thomas’ messages to businesses about motivation and flexibility are powerful and enduring.

The challenge of free solo climbing is daunting to the most experienced mountaineer. Using neither ropes nor any other protection, a climber hangs onto overhanging rock and ice faces up to ten thousand feet high, using his fingers and feet alone. Thomas’ life relies completely on his dedication and focus, and without the ability to make life-changing decisions under extreme pressure, he faces certain death.

Thomas speaks in French, Italian, English and German at his corporate engagements.

What people said about Thomas Bubendorfer