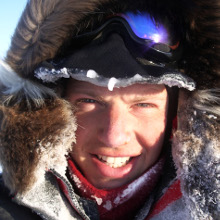 Tom Avery is an explorer with a passion for adventure, he is an exciting and entertaining keynote speaker. Due to his former life as a City accountant, Tom has the ability to speak about his explorations in a way that will relate to corporate audiences, covering areas such as leadership, and overcoming challenges and barriers.

C: £5K - £10K
"We can rely on you to respond so relevantly to an audience and entertain, inspire and hold the attention of the audience."
Allied Domecq
Teamwork, Adventure, Finance & Economics, Leadership Motivational Speakers, Keynote Speakers

Accountant to explorer, Tom Avery is an exciting  keynote  speaker who captivates audiences with his tales of exploration and adventure.

Tom graduated from Bristol University where he studied Geography and Geology, after graduating he got a job with Arthur Andersen as an accountant. Tom soon released that he had to make a choice between his life and London and his mountaineering expeditions, he chose the latter and moved to Verbier to become a ski guide. While in Verbier, Tom started to run mountaineering expeditions.

In 2000, Tom led a British expedition on a 20-mile mountain range, which ran along the Chinese border. When he had returned from his adventures in central Asia, Tom decided that he would travel to the South Pole and started to plan his trip. He had dreamed of this expedition since he was young and after two years planning he was finally ready for the Commonwealth South Pole Centenary Expedition. The team began their 705-mile journey, they battled severe weather conditions as well as frostbite and altitude sickness but managed to complete the expedition a few days after Tom’s 27th birthday. Tom was one of the youngest Briton’s to complete the journey to the South Pole and the team broke the South Pole speed record using state of the art kites to help them gain speed on the last 47 miles of the journey.

Tom’s other big expedition was the Barclays Capital Ultimate North, where the team followed Robert Percy’s route from 1909 to prove that it was not an impossible route-Tom and his team completed it with five hours to spare.

Tom is an experienced speaker and has spoken for some of the most established organisations including KPMG, Johnnie Walker, PWC, NHS, Barclays and John Lewis to name only a few. Tom was an ambassador for both the London 2012 Olympics and The Prince’s Trust and is a Fellow of the Royal Geographical Society.

In 2015 Tom broke the record for the fastest crossing of Greenland. With his team, he travelled 350 miles coast-to-coast in a time of nine days, 19 hours and 40 minutes - knocking more than eight days off the previous record.

Tom has presented documentaries for the BBC and Channel 4 and his expeditions have been covered by media outlets such as the Daily Telegraph, The Guardian and Men’s Journal. Tom is also a published, highly acclaimed author.

Tom tells inspiring stories of his mountaineering experiences which cater to all ages of men and women. He speaks about  leadership  skills and what it takes to overcome extreme challenges, topics which are relevant to corporations.

What people said about Tom Avery