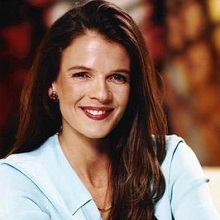 Former British tennis champion and one of the best known British sports personalities on television today. With a career spanning 20 years in both the tennis realm and as a broadcaster, Annabel adds a touch of class to any event and her genuine enjoyment for hosting such occasions translates fluidly from the stage.

Annabel Croft juggles being an energetic mother of three whilst maintaining her profile as one of the best known British sports personalities on television today. A former British tennis champion she developed a successful media career initially as the glamorous face of Channel 4’s Treasure Hunt and ITV’s Interceptor and in recent years has used her vast experience of the tennis circuit to contribute to a number of channel’s coverage of the sport.

Annabel has also hosted her own series ‘The Flying Picnic’ for ITV and Sky Travel. Travelling around in an original DeHavilland Moth plane, she collected the ingredients from around Britain to recreate the famous household guru’s ‘Mrs Beeton’s Picnic for Forty’ which since airing has received record viewer ratings.

Naturally every year sees Annabel continue to play an integral role in the coverage of Wimbledon for the BBC, Radio 5 Live, LBC and GMTV as she keeps her involvement in the game at the highest level both on and off screen. She is also a key member of Fox TV's coverage of the Australian, French and US Opens.

Annabel retired from professional tennis at the age of twenty-one. Immediately after her retirement, Annabel developed as an anchor, tennis reporter and as an all round sports correspondent. She is also frequent guest on lifestyle shows such as The Wright Stuff, The Entertainment Show, and This Morning.

Annabel’s multi-tiered marketing profile also means that she is in constant demand from the commercial sector where she fronts campaigns, is involved in advertorials, corporate videos and presentations as well as numerous personal appearances. She has successfully completed the New York marathon and remains committed to a fitness regime that has seen her look better than ever.

Annabel continues to support her passion in raising the awareness of child obesity in the UK and the issues and causes surrounding it. Annabel has a passion for healthy living, and combined with her profile and personal experiences, she is an ideal ambassador to educate the nation on improving their health and to promote an issue which is fast spiralling out of control.

Annabel is a popular choice for a whole raft of corporate functions. Her natural style and charm lend her perfectly to gala dinner evenings and awards ceremonies, which she hosts with ease and understated glamour. Annabel adds a touch of class to any evening event and her genuine enjoyment for hosting such occasions translates fluidly from the stage.

Annabel has a strong and opinionated outlook on modern society making for a great conference host. Suitable for linking and facilitating general company conferences, her natural spark and approachable nature ensure that audiences relate to her easily.

The latest addition to Annabel's corporate portfolio is her after-dinner speech in which she presents a light-hearted look at her tennis and media experiences over the last 20 years.