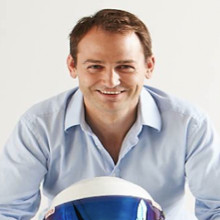 Formerly Top Gear's The Stig and Daniel Craig's stunt driver in James Bond, Ben Collins is renowned for his speedy, slick driving and daredevil stunts. Ben's vast motorsport and television career make him perfectly placed to enlighten an audience with his library of tales from his automotive history. Also an accomplished awards host and after dinner speaker, Ben's professional and light-hearted manner will delight an event.

Bristol-born Ben moved to California as a child, and competed as a junior Olympic standard swimmer. When a career as a fighter pilot was cut short by a visit to the optician, Ben switched to cars.

Ben won races in just about every category he contested, from Formula Three to Le Mans Sportscars and GT. In 2003, racing for RML, he captured the European ASCAR title. When a lack of funding temporarily curtailed his racing career, Ben joined the Army Reserves. He also began a new venture working as a Hollywood stuntman.

His TV breakthrough came when he was cast as the fourth presenter on BBC TV’s Top Gear programme. Known as The Stig, his task was to coach celebrities on how to get the best out of a “reasonably priced car”, organise car chases through cities and across continents, and test hundreds of priceless cars, sometimes to the point of destruction. Thirteen series on, his alter ego, that “man in the white suit”, is recognised by millions of Top Gear fans all around the world.

With his role as The Stig now over, Ben has returned to his first passion; motor racing. He rejoined the team that last gave him a championship title, RML and co-drives the team’s Lola HPD in the Le Mans Series with Mike Newton and Thomas Erdos, with whom he shared a class win at the end of his first race with the squad in July 2010.

What people said about Ben Collins