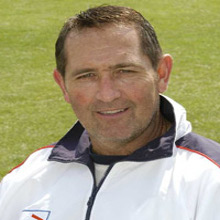 The most prolific run scorer that top-class cricket has ever seen, Graham Gooch is one of only twenty-five players to have scored over 100 first-class centuries. The former Essex and England Captain, Graham has learned a lot about leadership and team building throughout his career. As a speaker, he uses his knowledge and experience to impress corporate audiences, entertaining them with stories from his years as a professional cricketer.

E: < £3K
"Having heard Graham speak at Ashridge (European Centre for Management Training), I was asked by my own company if there would be anyone suitable from the sporting world to speak at our CPD (Continued Professional Development) seminar at the Belfry in January 2005, Graham was the natural choice and gave a highly relevant and cohesive speech outlining the similarities between sport and business and the general theme as written in our newsletter was of preparation, commitment and dedication. The delegates (Chartered Surveyors) were very impressed, the feedback was extremely positive. On the whole though I think they were highly entertained with intelligence, humour and by a glimpse into a world that most can only dream of."
Business Development Manager,Wolton Chartered Surveyors
Sport, Leadership Personal Appearances, After Dinner Speakers

Graham Gooch was Captain of the England Cricket team and one of the most talented batsmen of his time. He has many entertaining stories from his cricketing glory days and is a popular after dinner speaker .

Graham played his first test cricket match in 1975 at the age of twenty-one when England played Australia in the Ashes. Graham was unable to play to his full potential during the Ashes and was dropped from the team, it was not until 1978 that he managed to get picked again due to his success playing for Essex. From 1978 onwards he became a constant member of the England cricket team and was able to prove his worth.

Graham’s cricket career was affected in 1982 when he was banned from playing for three years due to his controversial decision to play in the South African Rebel Tour. The tour, which was captained by Graham, was frowned upon by the International Cricket Conference and Graham and fellow players were punished for their involvement.

From 1989 onwards, Graham’s cricket career excelled and he was appointed captain of the England team for the second time. During this time he became holder of the highest score at Lords and was the first player to score a century and a triple-century in a match; Graham also took the record for the highest test score against India by an England Captain.

Graham led the England cricket team in over 30 matches and was captain during the 1992 world cup final against Pakistan. He continues to be England’s highest test run scorer. Since retiring as a player, Graham has coached at Essex County Cricket Club and spent four seasons as an England selector. In 2012, Graham became the Batting coach for England.

As a speaker, Graham is entertaining and charismatic and relates to stories from his years as a professional cricketer. Throughout his career he has learnt a lot about leadership and team building, skills which he focuses on in his speeches  and uses his knowledge and experience to impress corporate audiences.

What people said about Graham Gooch