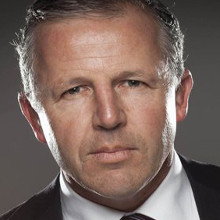 International Rugby legend Sean Fitzpatrick draws upon his experiences as a winning team captain to offer his expertise as a leader to businesses and management. With a series of impressive world records under his belt, the most-capped All Black player of all time and founder of Front Row Hospitality entertains and motivates with tales about his time on the pitch and within the media.

Not many can list ‘played in the first ever Rugby World Cup’ as an accomplishment, and even fewer can claim to have won it with their team the All Blacks.

Enter Sean Fitzpatrick (‘Fitzy’), the witty  after dinner  and  motivational  speaker who translates what he learned on the pitch as an international rugby legend to performance in business.

Since retiring from the game, Sean has worked as a rugby consultant and commentator on Sky Sports and ITV, has contributed to various publications, and is now the founding director of Front Row Hospitality Ltd—a high-end hospitality and events company that offers bespoke services to a global client base.

Sean’s career kicked off as a player for Auckland during the 1986 test series against France (a year later, they beat France in the final at Eden Park); he went on to play in 121 international matches and 92 test matches—a New Zealand record.

In 1992, he became captain of the world-cup winning team, a prestigious title which he held until his retirement from the sport in 1997. The most-capped All Black of all time, Sean racked up a hefty 51 test matches in this role.

An uncompromising competitor, the former Rugby Union player has also played in 63 consecutive test matches and 74 test match victories—more than any other!

Sean was awarded a New Zealand Order of Merit by the Governor General. He is also Vice-Chairman and Academy Member of the Laureus Sports Foundation.

With the same drive he displayed as a successful leader on the pitch, Sean has high-tackled his role as founder and director of Front Row Hospitality Ltd.

Using rugby as a starting point, ‘Front Row Leadership’ provides presentations and training sessions to businesses and management, encouraging the use of insights gleaned from the game to develop and improve performance.

What people said about Sean Fitzpatrick