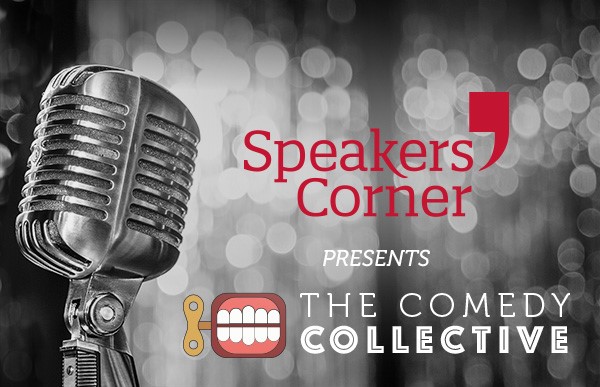 Our legendary Comedy Collective Showcase returns after an enforced hiatus to bring you the hottest talent on the corporate circuit today.

We've handpicked this exciting line-up to give you a flavour of well-known and rising stars that are making waves with corporate audiences.

Taking place on Tuesday 9th November from 18:00 at the prestigious White City House, we are looking forward to meeting you for what promises to be a hilarious evening.

Make sure to RSVP and who knows, maybe a surprise artist will join us for the evening too!

Your Host for the Evening

A regular warm-up performer for Have I Got News For You for many years, we're really excited Jo has agreed to host our comedy showcase event.

Your Acts for The Evening

Hal Cruttenden is a big hit with corporate audiences, tailoring his sharp and witty act for all manner of events.

Indeed, Hal is well known on the circuit for who poking fun at himself, from oversharing on social media to the 5:2 diet. With 4 nationwide tours under his belt, and a string of popular TV appearances, we are delighted Hal is joining us for our comedy showcase!

One of the few performers to have been nominated for the Perrier Award in three consecutive years, Reginald D Hunter has been leaving audiences in hysterics for the past 20 years with his brutally honest, but meticulously thought out stand-up routine.

Hailing from Georgia, USA, Reginald initially took to comedy as a dare. Two decades later, we're glad he took on that challenge as he prepares to take part in our comedy showcase.

Rich Hall has audiences laughing from start to finish with his expertltly crafted tirades and quick-fire banter with audiences.

Rich is well known for his appearances on the 'The David Letterman Show', the inspiration behind 'The Simpsons' character Moe Szyslak, and a regular panellist on hit UK comedy shows. We're super excited Rich is joining us for our comedy showcase.

A former banker, ex-Muslim, and the son of a Thatcherite and a Labourite, Eshaan Akbar is creating an international name for himself as a brilliant comedian.

Eshaan has performed three sell out shows at the Edinburgh Fringe, as well as sell out London transfers at the Soho Theatre. Eshaan has opened for Micky Flangan, and has supported Dane Baptiste, Hal Cruttenden, Jan Ravens and Rory Bremner on tour.

Eshaan has appeared on shows such as Mock the Week and QI, so we're sure he's going to be a hit with our audience during this showcase.

Sukh Ojla took her debut solo show, ‘For Sukh’s Sake’ to Edinburgh's Fringe Festival in 2019, and received rave reviews including 5* from Funny Women.

Sukh is currently on a nationwide tour with her new show ‘Life Sukhs’. Credits include: The End of the F**king World (Channel 4) GameFace (Channel 4), Hospital People (BBC1), Future Conditional (Old Vic), Black Mirror (Channel 4), EastEnders (BBC1) and The Comedy Guide to Life (BBC), so we're delighted she has taken time out of her busy schedule to join our showcase event.

A popular fixture on the corporate entertainment circuit, Ray Badran is an award-winning stand-up comedian and writer hailing from Sydney, Australia.

Renowned for his off-beat observational comedy, Ray has written for various TV shows, comedians, advertising agencies, theatre productions, radio series and more. Now based in London, Ray is a regular in all the national clubs and brought his debut solo show Everybody Loves Ray, Man to the Edinburgh Fringe in 2019 where it was met with critical acclaim.

We are delighted to be holding our comedy showcase event at White City House, a splendid venue occupying part of the former BBC Television Centre building.

We will have Speakers Corner staff on hand to welcome you as you arrive.

The venue is within walking distance from White City (Central Line) and Wood Lane (Circle/Hammersmith & City Line) underground stations. You can use the map below to plan your journey.