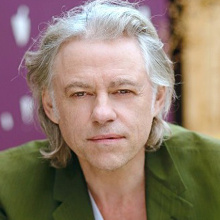 Singer, songwriter and political campaigner, Sir Bob Geldof iconic dynamism is infectious as he brings together communities to help make the world a better place. A political activist for ethical and social responsibility, Bob has used his incredible fame to give back to the planet. Known for his anti-poverty effort in Africa, Bob's charity work and professional conviction make him an adept keynote speaker, ideal to educate audiences on social responsibility.

Rock star, political activist, philanthropist and icon, Sir Bob Geldof is a symbol of creativity, energy and a conviction to improve our world. His passionate determination to take action in the face of human suffering makes him the ideal ethical and social responsibility  keynote speaker .

Born and educated in Ireland, Bob worked as a pop journalist in Canada before he turned to his passion, rock music.

The Boomtown Rats had a couple of hits in the 1980’s but it was when Bob founded the Band Aid trust, and raised $8 million for Africa famine relief through the release of pop record Do They Know It's Christmas?, that  he became a household name.

Bob put on Live Aid concerts in London and the US, and raised a further $48 million. Witnessing the power of his efforts, he spent the rest of his career campaigning and promoting issues of world poverty and humanitarian crises.

In 2004 he was appointed a member of the Commission for Africa initiative, which was tasked with coming up with new ideas for minimising poverty in the developing world. The Band Aid effort was reworked that same year to raise substantial funds for Darfur, and in 2005 Bob organised a series of ‘Live 8’ concerts, planned to coincide with the G8 summit on World Poverty.

At the 2005 Brit Awards, Geldof was honoured with a Lifetime Achievement Award. He also received an honorary knighthood in 1986, and was awarded the freedom of the City of Dublin in 2005.

Bob is a member of the Africa progress Panel, a group of individuals who advocate sustainable development in Africa, he is part of the team which helps collate a yearly report on the issues of oil, gas and mining in Africa.

He is on a mission to educate the younger generation about the terrifying reality of climate change.

In 2016 Bob was awarded the patron’s Medal of the Royal Geogrphical Society for raising public awareness and challenging the causes of inequality in Africa.

The accumulation of Sir Bob Geldof’s life work ensures he is the ideal keynote speaker for issues of ethical accountability  and corporate social responsibility.