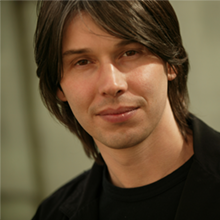 Brian Cox is a Royal Society University Research Fellow based in the Particle Physics group at the University of Manchester, where he holds the chair in Particle Physics. He is known for his involvement in BBC science programmes and is a popular a TV and radio presenter.

He is known for his involvement in BBC science programmes, including In Einstein's Shadow, the BBC Horizon series ("The Six Billion Dollar Experiment", "What On Earth Is Wrong With Gravity," "Do You Know What Time It Is?" and "Can We Make a Star on Earth?") and for voiceovers on the BBC's Bitesize revision programs.

He writes on scientific issues in the popular press, the most recent credits include the New Statesman and The Times. Brian regularly gives public understanding of science talks at schools, science festivals and conferences, most notably at TED.

His main research interest is the FP420 R&D project, aimed at upgrading ATLAS and CMS with forward proton detectors 420m away from the interaction points. In the past, he worked at the H1 experiment at DESY in Hamburg, and the D0 experiment at the Tevatron at Fermilab, Chicago.

Brian completed his thesis in 1998 on diffraction at large momentum transfer at the H1 experiment at HERA in Hamburg.

Not limited to science, Brian has had other jobs too... He was a musician for a time and was elected a fellow of The Explorers Club in 2002.

He is in high demand as a TV and radio presenter, and worked as the scientific consultant for a film called Sunshine, written by Alex Garland and directed by Danny Boyle.