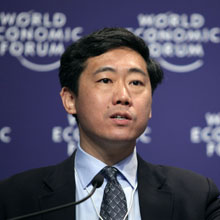 David Daokui Li is the Mansfield Freeman Professor of Economics and Director of the Center for China in the World Economy at Tsinghua University's School of Economics and Management. A prominent economist, David is a leading authority in international, particularly Asian markets. A financial expert and highly knowledgeable in his field, David can deliver an exceptional and relevant keynote speech.

David Daokui Li is a highly influential and prominent Chinese economist, a former member of the Monetary Policy Committee of the People’s Bank of China, and Director of the Center for China in the World Economy at the School of Economics and Management of Tsinghua University. He holds a Ph.D. in Economics from Harvard University and speaks fluent English. He quoted frequently in the Wall Street Journal, New York Times, Bloomberg and financial media throughout the world.

Before joining Tsinghua, he was a member of the faculty of Hong Kong University of Science and Technology and the University of Michigan, and was a National Fellow of Hoover Institution at Stanford University. In 2006, David Li was chosen by Wall Street Wire as one of the ten most influential economists in China, his continual work with the senior leadership in China has cemented this accolade.

His has conducted research alongside the Ministry of Education and the internationalization of RMB supported by the National Science Foundation of China. He is also leading a research team working on re-evaluating the GDP and economic structure of ancient China, including the Ming Dynasty.

David's extensive knowledge and research of the Chinese economy and culture make him an ideal candidate to speak at any event around these topics.