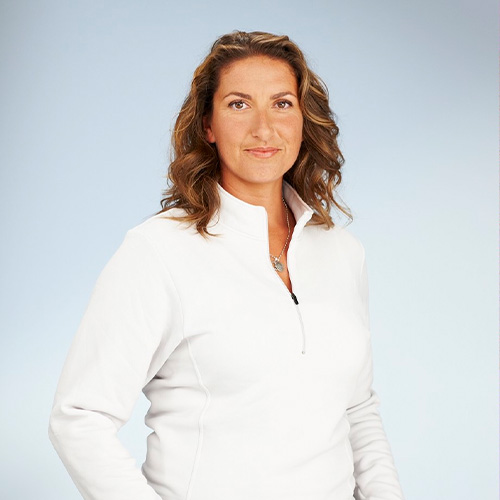 Record breaking sailing star Dee Caffari was the first female to circumnavigate the globe the 'wrong' way, battling against currents, winds, and weather! She draws out the lessons from these experiences, covering themes including teamwork, leadership, and achieving high performance.

C: £5K - £10K
"What comes over so strongly is her enthusiasm, excitement, ability to articulate her story and to engage with an audience."
Nationwide
Sport, Teamwork, Adventure Motivational Speakers, Keynote Speakers

International sailing star Dee Caffari MBE is a motivational and inspirational keynote speaker who invokes emotion in audiences and conveys valuable business lessons drawn from her rich experiences of adversity, teamwork and success.

On May 18th 2006, Dee sailed into the record books with an extraordinary feat. She became the first female to circumnavigate the world ‘the wrong way', battling prevailing currents and winds. She completed the task alone and without stopping for the entirety of the 29,100miles.

Once a schoolteacher, in her heart Dee knew she wanted to leave her mark on this world in some other way. She swapped school books for the skipper lifestyle and began to follow her dreams. Matching her male competition and indeed exceeding them, her skill and leadership began to shine through. In 2004 she was picked to lead a team of amateurs - in the challenging Global Challenge Yacht Race.

Dee was the only female skipper, and the way she powered through extreme adversity was lauded. Praised for overseeing the largest ocean rescue in that area when one of her crew-members had to be airlifted off the yacht, she became the recipient of a coveted BP Safety Prize as well as a Media Prize in commendation of her ability to write with honesty and humour in the daily log.

Nominated for the coveted ISAF Rolex World Sailor of the Year Award in 2011, Dee is one of the greatest sailors and most popular personalities on the corporate and after dinner speaking circuit.

In 2014, Dee joined Team SCA in 2014, the all-female entry into the Volvo Ocean Race. During training, the team successfully claimed the Round Britain and Ireland speed record for a female crewed monohull in 4 days 21 hours and 39 seconds.

She has sailed around the world six times, each time breaking records and cementing her passion her the sea. She has been awarded an MBE for her achievements.

Dee most recently led the crew of Turn the Tide on Plastic in the Volvo Ocean Race 17/18. Backed by the Mirpuri Foundation, the team's mission was to amplify the United Nations Environment's Clean Seas campaign and raise awareness of plastic pollution in our oceans and inspire people to take action in their day-to-day lives.

Dee sits on the Operations Committee for the RNLI and is a patron for GAFIRS, an Independent Lifeboat station. She is also a patron for the charity Sail 4 Cancer and St Mary’s Junior Sailing Club, and is proud to be an ambassador for UKSA and the RYA Green Blue Campaign helping to promote a better marine environment.

Since 2015, she has been a presenter and producer for the online Global Women’s Sports Network WiSP Sports helping to support and promote female athletes and sport.

Pioneering self-belief and working to build confidence, Dee can talk about leadership, motivation, teamwork and overcoming self-limitations. Sought-after on the circuit for her motivational speaking, Dee’s unforgettable story will leave anyone inspired.

What people said about Dee Caffari