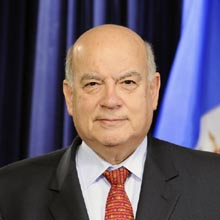 A left-wing Chilean politician and statesman, Jose Miguel Insulza was the former secretary general of the Organization of American States. One of the leading figures of public service in his country, Jose is an exemplary figure. Jose vast experience in political affairs, global influence and leadership in battling issues such as territory and narcotics, ensures he is an accomplished and highly interesting keynote speaker.

In May 2015, Jose Miguel Insulza, former Secretary General of the OAS, stepped down after a decade in the post. When he first took office in 2005, Insulza pledged to strengthen the Organization’s 'political relevance and its capacity for action.'

Jose Miguel played a key role in Chile's Popular Unity government, serving as the  Political Advisor  to the Chilean Ministry of Foreign Affairs and as the director of the Diplomatic Academy of Chile. In 1973, the Chilean military coup d'etat brought Augusto Pinochet to power, and forced Insulza into exile for 15 years. Eventually returning to Chile in 1988, he joined the Coalition of Parties for Democracy, which won the election against Pinochet in October 1988.

Since his return to Chile, Insulza has held a number of high-level government positions including serving as Chilean Ambassador for International Cooperation, Director of Multilateral Economic Affairs at the Ministry of Foreign Affairs, and Vice President of the International Cooperation Agency. He was then appointed Under Secretary of Foreign Affairs and Minister of Foreign Affairs, and in 1999 he became Minister and Secretary-General of the Office of the President. In 2000 he became Minister of the Interior and Vice President of the Republic, where he stayed until 2005, when he was elected the Secretary General of the OAS.

At the OAS he played a key role in negotiations related to regional matters and democratic constitutional processes, including support for autonomy in Bolivia’s Santa Cruz Province and the 2008 Andean Diplomatic Crisis.

In 2009, Insulza was instrumental in the lifting of the 1962 resolution promoted by the US, which suspended Cuba from the OAS. He was strongly in favour of improving relations between the OAS and Cuba, in the belief that it would bring greater stability to the region.

He has frequently successfully mediated territorial disputes, as in the case of Belize and Guatemala and provided outstanding support for Haiti after the monumental earthquake. His ability to solve disputes enables the championing of democracy and promotes dialogue.

Examples of Insulza’s determination to stabilize the region are numerous. Under his guidance, the Inter-American Commission of Women has become increasingly relevant in the region. He is steadfast in his commitment to end violence against women, to eliminate economic discrimination based on gender, and to improve the equal participation of women in politics. He approved the 2014 LGBT human rights resolution, in which the OAS condemns 'all forms of discrimination against persons by reason of their sexual orientation and gender identity or expression.' In addition, the OAS has urged all member states to implement policies against discrimination.

Under Insulza’s direction, the OAS has worked tirelessly to eradicate the continuous narcotics and organized crime problem in Latin America. In September 2014, the General Assembly adopted a resolution that recognized the worldwide drug problem and encouraged member states to implement and strengthen comprehensive policies to combat the issue.

In 2014, Insulza received the prestigious COHA Kalman H. Silvert Award for his leadership and contribution to hemispheric affairs.

For further information or to book Jose Miguel Insulza, call us at Speakers Corner on +44 (0)20 7607 7070 or email info@speakerscorner.co.uk