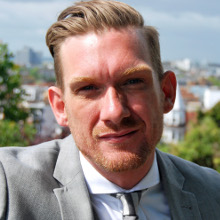 From dishwasher to UK Restaurant Manager of the Year, Peter Avis rose through the ranks of the hospitality industry to the rooftop heights of Branson’s prestigious Babylon Restaurant through hard work and fierce determination. As a keynote and after dinner speaker, Peter shares his passion for customer service and responsibility, and draws on his inspirational rags to riches story to demonstrate that anyone can aspire to reach whatever level they may choose.

From dishwasher to UK Restaurant Manager of the Year, Peter Avis’s rise through the hospitality industry epitomises the power of hard work, humility and perseverance.

The message that he shares as a  keynote  and  after dinner speaker  is one that all audiences can relate to, particularly those working in sales , customer service , retail , and hospitality: simply get on with it, and you’ll be rewarded on the way.

Peter now works directly for the Virgin Group Chief, Sir Richard Branson. He may have passed green beans to Beyoncé during dinner on Necker Island, but his climb to the 7th floor of The Roof Gardens, home of the prestigious Babylon Restaurant, was a rickety one.

A dyslexic lad who grew up on a council estate in Liverpool, Peter left school at 16 with limited qualifications and an uncertain future. He was, however, willing to do anything and to learn on the way.

While visiting his sister in Miami, he took his first job as a dishwasher. With an attitude that shone as brightly as the plates he meticulously polished, Peter was quickly relocated to the restaurant floor where he displayed natural people skills and a flair for the business.

His ensuing years at the MGM Grand Hotel in Las Vegas and the Royal Garden Hotel in London taught Peter the importance of training, communication, service and consistency. Hungry to pursue his ambition to the top, he eventually gained an assistant manager position at a private restaurant in Knightsbridge, London.

In 2001, Peter was approached to join the opening team of Babylon Restaurant, where he went from supervisor to manager in the space of a few years. Under his leadership, the Virgin venture scooped the Best London Restaurant award at the Visit London Awards in 2008, and, a year later, Peter himself was crowned UK Restaurant Manager of the Year.

His achievements in the field were also recognised in 2014 upon receipt of the Richard Branson Special Award for Services to the Community and the highly-coveted Carey Award for Manager of the Year.

‘Never be complacent,’ says Peter. ‘Always be ahead of the game and never lose your passion for whatever it is you choose to do.’

Peter is certainly passionate about his profession, and he views it as a manager’s responsibility to instil the same enthusiasm within one’s team, having successfully retained the majority of his staff at Babylon over the years.

Speaking at numerous industry events, Peter engages with debates regarding the future of hospitality, such as the skills shortage within the sector and what can be done in the UK to address this. In addition to serving as Chairman of the Guild of UK Restaurants, as Board member of the ACFWS Academy of Food and Wine Services, and as Board member of Spring board, he is also an active member of the IOH (Institute of Hospitality), the BHA (British Hospitality Association), and the RA (Restaurant Association).

He strongly believes that anyone can pursue a successful career in the industry, regardless of their origins: his own story is testament to this.

- ‘The man behind the crown’: from dishwasher to award-winning restaurant manager

- The hospitality industry and its future

- Instilling passion in your team

What people said about Peter Avis