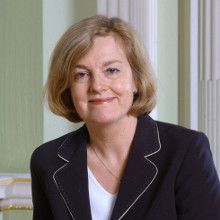 Formerly the Deputy Governer of the Bank of England, Rachel Lomax is a prominent banker, economist and keynote speaker. Now a non-executive director of BAA and HSBC Holdings, Rachel is an authority on the current economic climate, monetary values and the travel industry. Accomplished and intelligent, Rachel's financial, parliamentary and banking experience ensures she is an adept keynote speaker ideal for the corporate world.

Rachel Lomax is an excellent keynote speaker. She is a British economist and government official who served as Deputy Governor of the Bank of England from 2003 until June 2008. She was appointed the Senior Independent Director of HSBC Board of Directors in 2015.

Rachel Lomax graduated from Girton College Cambridge in 1966 and obtained an MSc in Economics from the London School of Economics in 1968.  In 2007 she received an honorary degree from the University of Glasgow.

Rachel's financial, parliamentary and banking experience make her the perfect choice as a keynote speaker, talking on monetary assessment and the economic outlook.

Before joining the Bank, between 1999 and 2002 Rachel was Permanent Secretary at the Department for Transport. She was a Vice President and Chief of Staff to the President of the World Bank in 1995-6 and Head of the Economic and Domestic Secretariat at the Cabinet Office in 1994. In 2008 she was appointed as a non-executive director of HSBC Holdings plc.

Her earlier career was spent at HM Treasury, which she joined in 1968 and worked on a wide range of macroeconomic, monetary, and financial issues. She was Principal Private Secretary to the Chancellor of the Exchequer, the Rt Hon Nigel Lawson, in the mid-1980s, and Deputy Chief Economic Adviser in the early 1990s gaining responsibility for financial regulation and city affairs in 1992. Rachel has been a non-executive director of The Scottish American Investment Company and Reinsurance Group of America.

Rachel has several decades of financial experience, much of it gained at the heart of the British economy. Rachel's insight into monetary policy provides an incisive and enlightening view of the world we live in today. Her experiences gained throughout her career including her membership of the Monetary Policy Committee - where she had specific responsibility within the Bank for Monetary Policy - included monetary assessment and money market operations, offering a unique perspective on economic matters.

Able to speak about monetary policy, economic assessments and money market operations, Rachel is a brilliant speaker for all kinds of financial and security events.

What people said about Rachel Lomax