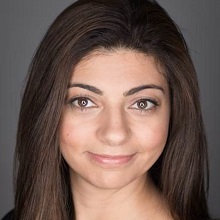 As her popular  TED talk made apparent, Dr. el Kaliouby has the ability to simplify and translate complex science, and make it accessible to any audience.

What if our high-tech devices could decipher and respond to our every action and feeling? Rana el Kaliouby, Ph.D., is on a mission to humanize technology with artificial intelligence (AI) that understands not just our commands but our facial expressions, body language and emotional states, or what she calls “Human Perception AI.” She envisions and works to create a world where devices and technologies that once separated us will bring us together. It’s the next frontier in AI, with commercial applications across industries – and it’s closer than we think.

A computer scientist, technologist, entrepreneur and business leader, Dr. el Kaliouby believes that “humanizing technology gives us a golden opportunity to reimagine how we connect with machines, and, therefore, how we connect with each other.” Co-founder and CEO of Affectiva, the category-defining MIT spinoff and pioneer of Emotion AI, el Kaliouby invented the company’s award-winning emotion recognition technology. Using large, diverse datasets – comprised of 8.8 million faces analyzed in 87 countries – to detect complex and nuanced emotions and cognitive states, the Emotion AI platform combines facial expression and tone of voice to infer how a person is feeling. Now, having advanced the technology beyond just emotions, el Kaliouby is pioneering Human Perception AI: software that analyzes face and voice to detect nuanced human emotions, complex cognitive states such as drowsiness and distraction, activities and objects people use. El Kaliouby has raised over $50 million in venture and strategic funding for Affectiva, where the company’s technology is used by leading companies in the automotive industry to improve road safety and deliver better, more personalized transportation experiences. In addition, 25% of the Fortune Global 500 companies use Affectiva’s technology to test consumer engagements with ads, videos and TV programming. It is also used in healthcare, education, social robotics, conversational interfaces and more.

Teaching machines to measure and interpret human emotions has the potential to dramatically improve lives, with such powerful applications as assisting doctors and nurses in delivering better care, engaging students and personalizing their learning experience, and increasing road safety by making “emotionally aware” vehicles. It also promises to forever change the rules of consumer engagement by providing real-time insight into viewers’ emotional responses to brands, ads and other digital content. El Kaliouby’s work and research into new frontiers for AI technology are the subject of her upcoming book with Carol Colman, “ Girl Decoded: A Scientist’s Quest to Reclaim Our Humanity By Bringing Emotional Intelligence to Technology ” (Penguin Random House, April 2020).

As her popular TED talk made apparent, Dr. el Kaliouby has the ability to simplify and translate complex science, and make it accessible to any audience. Her credentials as a popular spokesperson for science led to her co-hosting the PBS Nova Series, “ Nova Wonders ,” which premiered in April 2018. A founder of her own technology company, an accomplished inventor, and one of few women to have successfully transitioned from academia to business, Dr. el Kaliouby – and her work – earn considerable recognition.

A passionate advocate for innovation, ethics in AI and diversity, she was named to the 2018 Thinkers50 Radar list of management thinkers most likely to shape the future of how organizations are managed and led; to Fortune’s 2018 40 Under 40 of the most influential young people in business; Forbes America’s Top 50 Women in Tech; Inc.’s Female Founders 100 ; Bostinno’s 50 on Fire and WIRED’s 25 Geniuses Who Are Creating the Future of Business. Recently inducted into the Women in Engineering Hall of Fame, Dr. el Kaliouby is also a World Economic Forum (WEF) Young Global Leader and a newly minted Young Presidents’ Organization member.

Prior to founding Affectiva, Dr. el Kaliouby was a research scientist at the MIT Media Lab where she spearheaded applications for facial coding to benefit mental health, autism and other research areas. Born and raised in Cairo, she received Bachelor of Science and Master of Science degrees in computer science from the American University in Cairo and a Ph.D. from the Computer Laboratory, University of Cambridge.