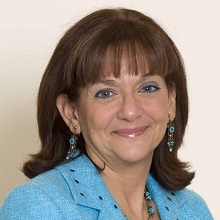 Baroness Ros Altmann is an independent expert on pensions policy, investment banking, savings and retirement. She is an economist by training and an investment banker by profession, having extensive experience of all areas of pensions, from state pension policy to investment management of pension funds.

Baroness Ros Altmann is one of the UK’s leading pensions experts, with over 35 years’ experience in all aspects of pensions, from state pension policy to investment management of pension funds.

She has worked as an independent consultant for many years, advising governments, the pensions industry and pension funds on policy and investment strategy. A frequent media commentator on pension issues, she regularly writes articles and speaks at conferences on pension reform.

Ros has campaigned for many years against pensions injustice and won numerous awards, including Pensions Personality of the Year and Industry Guru of the Year.

Her policy advisory work specialises in pensions and investment-related issues, and her work has often focussed on the consumer perspective, focussing on helping pensioners or older citizens enjoy better later life income.

She was a consultant to the UK Treasury on the Myners Review of Institutional Investment and has worked on pensions policy issues with the Number 10 Policy Unit. She successfully spearheaded a campaign, lasting over 5 years, to force the UK Government to compensate 150,000 workers who lost their final salary company pensions after being falsely assured by the Government that their pensions were completely safe.

Ros began her career as an academic at University College London, London School of Economics and Harvard University, where she analysed occupational pensions and pensioner poverty.

After moving into the City to manage pension fund assets, she was placed in charge of international equities and strategy at Chase Manahattan, Rothschilds and NatWest.

She was Director General of Saga from 2010 to 2013; served as the Government’s Business Champion for Older Workers from 2014 to 2015; and was appointed to the House of Lords and became Minister of State for Pensions in the UK Government following the May 2015 General Election until July 2016.

In 2014, Ros was awarded a CBE in the Queen’s Birthday Honours for service to Pensioners and Pension Provision.