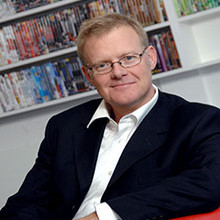 The former CEO of Mothercare and LOVE FiLM, and now the Chairman of Moo.com, Simon Calver is a leading expert in business innovation and leadership. The entrepreneur is well-placed to discuss company growth, making a leadership role work and how to ensure business success. Simon's impressive career history makes him an excellent choice for the corporate circuit.

C: £5K - £10K
"Simon was an excellent speaker and was a pleasure to work with. His session was rates as one of the best sessions at the event."
Sitecore UK Ltd
Technology, Business, Customer Service, Innovation, Entrepreneurs, Retail Keynote Speakers

With an entrepreneurial spirit and exemplary success as CEO of some of the UK's most innovative and preeminent businesses, including pioneering a new way of watching movies with LOVEFilm and turning Mothercare around, Simon Calver's management style is natural and pragmatic. Combined with the genuine knowledge and wealth of experience he has amassed, Simon is an impressive, down to earth and accessible  speaker .

He is the Chairman of award winning online printing giant moo.com and the Chairman of UK Business Angles Association, a Board which aims to encourage Angel investing in the UK.

Simon was appointed to Mothercare as a result of a downturn and implemented a three year plan to turn the business around, in the process closing about 100 stores and saving £13m a year.

Mothercare has hundreds of stores throughout Great Britain, Europe, the Middle East and Asia and has more than 50 years of experience in the maternity goods sector. The store features on the FTSE SmallCap Index and has won a vast number of awards in its sector, including the 2012 Pregnancy & Birth Bloom Awards winner for best maternity basics and the 2011 Mother & Baby Award for the best nursery retailer.

Before this, Simon Calver was CEO of LOVEFiLM, a leading European film and TV subscription service with over 1.6 million subscribers in the UK, Germany and Scandinavia and an annual growth near 50%. The company was named growth company of the year in 2010 by the CBI/Real business and has also headed the Sunday Times Buyout Track of top 100 VC/PE backed UK businesses.

Simon has also been International VP of Sales Operations for PepsiCola, based in the US and General Manager and VP of PepsiCola UK where he launched Pepsi Max, Pepsi Blue and development of the Pepsi Music activity.

Simon began his career as a graduate in Unilever and as a strategy consultant at Deloitte. He was a winner of Ernst & Young's Entrepreneur of the Year 2009 for London and the South East and representing the region in the National finals. He is a Companion of the Chartered Management Institute and is a fellow of the IoD. He regularly speaks across the country on management, change, workplace culture, leadership and entrepreneurship.

What people said about Simon Calver