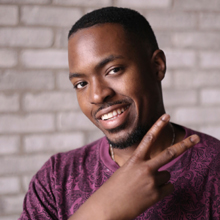 When the name Suli Breaks is mentioned, one or all three of the following words spring to mind; charismatic, controversial and conscientious. Suli has been hailed by many high-profile individuals as a new-school pioneer. As the world’s leading Spoken Word Artist, Suli Breaks creates powerful poetic presentations that give voice to organisations and help them tell their most powerful stories.

True poetry allows us to explore without restriction or restraint and artist, speaker and writer Suli Breaks takes audiences on a linguistic journey of discovery. Passionate about the written word, Suli aims to inspire and educate a generation.

With an (unused!) Law degree from Sheffield University, poetry addict Suli is an inspiration to all who meet him.

A lover of the written word, Suli is a visionary undaunted by the restrictions found in conventional poetry, leading him to push boundaries in a bid to inspire and inform a generation. An artist, speaker and writer, he is often considered an inspiration by those who have met, watched or listened to him.

Fuelled by his literary passions and by the lack of post-graduation jobs available, Suli’s pursuit of a career in poetry was a protest at the deficiencies of the UK’s formal education system.

Local venues and universities were his platform for five years, and solidified his fan base. Through social media he spread his work across the globe and has found fans of every generation, creed and nationality.

Suli’s achievements were built on the unprecedented success of spoken word piece ‘Why I Hate School But Love Education’. With coverage on the BBC; a DVD and success at competitions, the piece has been seen by an audience of over 7 million – to overwhelmingly positive acclaim.

He has been featured in the Huffington Post, Washington Post, the Guardian, The independent, and has taken the stage as a guest speaker at numerous events around the world, and has become a hit on websites such as Worldstarhiphop and Upworthy.com.

Since his fame has only grown through his performance at TED Global and his series of stories on the app Oolipo which tells stories of adolescence in London.

Inspiring the world, Suli is the perfect spoken word artist to empower and inspire an audience.