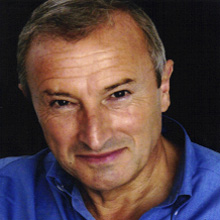 Jim Rosenthal is one of the best-known presenters of television sport in Britain. In a career distinguished with many industry awards Jim has become a familiar guest in the living rooms of millions of sports fans in Britain. His professionalism combined with his witty yet erudite style make Jim an ideal choice as after dinner speaker.

C: £5K - £10K
"Jim was the consummate professional and held the event together wonderfully as well as being such fun to work with."
Stone Federation Great Britain Awards
Sport, TV Presenters Awards Hosts & Presenter, After Dinner Speakers

Jim Rosenthal is one of the best known presenters of television sport in Britain and a erudite and witty awards host and after dinner speaker.

In a career distinguished with many industry awards Jim has become a familiar guest in the living rooms of millions of sports fans in Britain.   He is identified with most of the major sports, having been the main anchor for Formula One motor racing, boxing, football, athletics and rugby.   He has also turned his hand to several minority sports which ITV have covered, including at one time pool, ice skating, equestrian eventing and clay pigeon shooting!

In 2003 the ITV team won a BAFTA for their coverage of the successful Rugby World Cup, which took him to Australia for the sensational final.  He has also been part of the teams covering World Cup Football and summer Olympics.  For nine seasons he traveled the world fronting ITV’s coverage of Formula One motor racing and had to deal with all manner of broadcasting situations.  He has twice been named as the Royal Television Society’s sports Presenter of the Year and has won other awards at home and abroad.  This autumn Jim will anchor ITV’s coverage of the Rugby World Cup 2007.

He is a skilled and sympathetic interviewer who has learnt to work under often the most difficult of circumstances.

On the international stage he regularly hosted the prestigious UEFA Gala Dinner in Monaco, a football spectacular which is broadcast across the world and he is often asked to host international conferences and awards ceremonies.  His apprenticeship was served on newspapers and BBC local and national radio.

In his previous BBC radio career he spent time as a cricket commentator, and has even tried his hand at acting in ‘Renford Rejects’ and ‘Footballers Wives’.  Jim has always be a football fanatic - his childhood home team of Oxford United have been through troubled times but he has remained a loyal supporter.

Jim is a patron of the Willow Foundation – a charity set up by former colleague  and footballing hero Bob Wilson and has been associated with the Duke of Edinburgh’s Award since he gained their gold award as a school boy in Oxford.

What people said about Jim Rosenthal