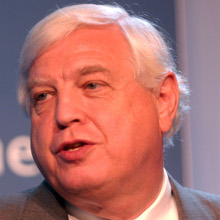 British foreign affairs correspondent, BBC News World Affairs and journalist, John Simpson has been bringing the UK news from more than 120 countries. Having a reputation for bringing the nation major scoops, John has reported on many of the globe's most historical moments. One of the most loved TV veterans, John is a consummate professional, bringing warmth and fluidity to any event.

B: £10K - £15K
"You did an incredible job, it was much appreciated and I would just like to say a very big thank you."
The Liverpool Cotton Association Ltd
International Affairs, Politics & Current Affairs, Security & Risk Keynote Speakers, Conference Facilitators, After Dinner Speakers

BBC News World Affairs editor, John Simpson is one of the UK’s most lauded and loved  TV news veterans .

John’s career has spanned over four decades, and he has become one of the most revered figures in international journalism in the world.

A Cambridge University English graduate, journalism was on John’s horizon from his student days as editor of campus publication Granta.

Joining the BBC as a trainee journalist in 1966, John quickly earned a reputation as steadfast, hard-nosed and determined.

His ambition and wide-ranging interests, along with his intelligence and analytical mind, took him on a journalistic journey from one ground-breaking event to another earth-shattering global episode. Before he knew it, John was knee-deep in war zones; face to face with controversial world leaders and challenging dictators with a camera, a microphone and probing questions.

Jobs as Diplomatic Editor and presenter of the Nine O'clock News were followed by a role as a correspondent in South Africa, Brussels and Dublin, and then, in 1988, John was appointed World Affairs Editor.

Reporting from war-torn Afghanistan; from central Belgrade during the Kosovo crisis, and determined to stay in Serbia even when authorities expelled him, John’s tenacity and speed made him one of the most admired reporters from almost every international trouble-zone.

John’s life has hung in the balance on more than one occasion. Ordered to kneel in the road at gunpoint by a Palestinian soldier; dodging bullets in Tiananmen Square, and standing a few yards away from the detonation of a 'friendly fire' anti-tank bomb in Iraq where he witnessed the death of his translator, John is no stranger to real fear.

John has also presented current and political affairs program Simpson's World, and in 1990 he was made associate editor of 'The Spectator' magazine. After six years in the post John moved into freelance journalism and wrote a foreign affairs column for The Sunday Telegraph, as well as a handful of books, including The Wars Against Saddam; Not Quite World’s End; News from No Man’s Land, and A Mad World, My Masters.

John’s career has been peppered with luminous awards from every established organisation that hands out media awards. In 1991 and 2000 he was named Royal Television Society Journalist of the Year; in 1991 he received a CBE; he was been awarded 3 BAFTAs, a Golden Nymph Award for his reporting of Ayatollah Khomeini's return to Iran; Audio Book of the Year; an International Emmy Award for News Coverage for his report on the fall of Kabul for BBC's Ten O'Clock News and a special jury's award at the Bayeux War Correspondents Awards in 2002.

For further information or to book John Simpson, in association with his management company, call us on +44 (0)20 7607 7070 or email  info@speakerscorner.co.uk

What people said about John Simpson