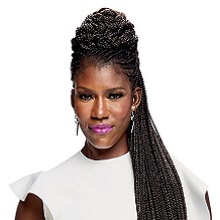 Bozoma “Boz” Saint John has earned a formidable reputation as a trailblazing brand and marketing executive and genuine change-agent who is the current Chief Marketing Officer at Netflix.

After college, Bozoma "Boz" Saint John spent time at the advertising agencies Arnold Worldwide and Spike Lee’s Spike DDB, as well as the fashion brand Ashley Stewart, where she held the position of Vice President of Marketing. She then joined PepsiCo, leading their foray into music festival-based marketing as head of the Music and Entertainment Marketing.

In 2014 Saint John was headhunted to join Beats based on her experience in music marketing. When the company was purchased shortly after by Apple, Saint John became the head of global consumer marketing for iTunes and Apple Music.

It was during the 2016 Apple Worldwide Developers Conference where Saint John’s breakthrough moment came, with journalists describing her presentation of the redesigned Apple Music onstage as one which oozed "passion" and persona that captivated both local and online audiences.

Biz Carson of Business Insider said that her appearance helped to emphasize Apple's complete rebuild of its Apple Music software, and Buzzfeed wrote that she was the "coolest" person to ever take the stage at an Apple keynote.

Magazines have recognized Saint John's work in superlative lists including Billboard Magazine's list of the top women in music, Fast Company's 100 most creative people, and AdWeek's most exciting personalities in advertising.

On June 6, 2017, Saint John became Chief Brand Officer at Uber where she has the task of turning Uber into a brand that people love in a similar way to her former employers Apple.

Bozoma “Boz” Saint John has earned a formidable reputation as a trailblazing brand and marketing executive and genuine change-agent who is now the current Chief Marketing Officer at Netflix and is one of the most effective marketers of any generation.