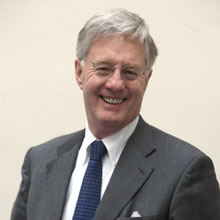 The principal economic commentator for The Independent newspaper, Hamish McRae's work focuses on excellence in the world economy, the shift of economic power to Asia and how technology interacts with human capital to shift competitive advantage. A futurist, author and keynote speaker, Hamish clarifies complex economic issues. He is a leading world expert on emerging markets.

Associate Editor of The Independent,  Economist , futurist, author and keynote speaker, Hamish McRae clarifies complex economic issues, and is a leading world expert on emerging markets. Previously named the Business and Finance Journalist of the Year at the British Press Awards, he is a key player in reporting on the changing face of the economy.

Hamish is one of the foremost thought leaders on the unique opportunities created by the economic downturn and the impact of new technologies on society.

He is an acclaimed author, and his book ‘What Works – Success in Stressful Times’, was longlisted for the Goldman Sachs/Financial Times Business Book of the Year prize in 2010. The work explores why some societies achieve sustained success and how others can learn from their processes.

Hamish is also placed amongst Europe’s leading futurists. He is the associate editor for The Independent and The Independent on Sunday, writes prolific columns on the business and finance industries.

Celebrated in his industry, his other awards include Financial Journalist of the Year in 1979, a special merit award in the first Amex Bank essay awards in 1987, 1996 Columnist of the Year in the Periodical Publisher’s Awards, the David Watt Prize for outstanding political journalism in 2005.

He has an MA in Economics and Political Science from Trinity College, Dublin, where he is an adjunct professor at the School of Social Sciences and Philosophy. He is a former council member of the Royal Economic Society.

An expert in the global economy, the rise of Asian economies and future trends, Hamish is the perfect addition to all manner of business events and conferences.

What people said about Hamish McRae