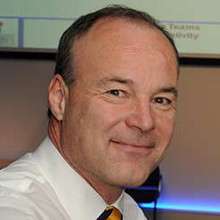 From flat beds on BA flights to the turnaround of Eurostar and Sainsbury's Bank, Hamish Taylor drives innovation in businesses, successfully leading them through times of change. As a keynote speaker, he provides business insight at all levels—from Prime Ministers and CEOs to front-line staff—inspiring audiences with his humorous stories, practical tools and infectious enthusiasm to look outside their current environment.

C: £5K - £10K
"Hamish helped us to start to think of our customers in a different way and to look outside our own industry. I had high hopes and expectations for the session and I am delighted to say Hamish exceeded them! In particular, I valued the way Hamish was spot on the briefing, adapted his presentation to make it even more relevant to us and was fully engaged for the whole time he was with us."
Pfizer Ltd
Business, Change, Customer Service, Innovation, Leadership Keynote Speakers

From flat beds on BA flights, to the turnaround of Eurostar and Sainsbury's Bank there is no one better qualified than Hamish Taylor to lead businesses through times of change or challenge. A  keynote speaker on innovation, business and change, Hamish draws on his spectacular career experience to give business insight at all levels.

Hamish embarked on his career with Procter & Gamble Ltd where he was responsible for the Flash brands. He then went on to become Head of Brand Management at British Airways in 1993 where he was responsible for the airline’s passenger brands (First, Club, Concorde, Shuttle, etc). Innovations included major product relaunches of Club Europe, Club World and First Class (including the introduction of flat beds).

The title of 'Master Thief' has been attributed to Hamish by the Inspired Leaders Network, based on his record of innovation by transferring ideas between sectors.

In 1997, at the age of 36, Hamish moved to Eurostar as Managing Director of Eurostar (UK) Ltd. The business was three years old and his remit was to reduce major losses. Two very succesful years in, he was appointed CEO of Eurostar Group.

By the end of 1999 Hamish was CEO of Sainsbury’s Bank, a joint venture between J Sainsbury’s plc and the Bank of Scotland. Once again, the objective was rapid growth in profit from the breakeven position he inherited. The ability to innovate and move away from traditional Banking approaches to behave more like a retailer proved the key to the significant growth that resulted.

With Sainsburys earning large profits, Hamish moved to his next challenge as CEO for Vision UK. Vision is an innovative consultancy, who first brought their Commitment Based Management techniques to the UK with the building of Intelligent Finance.

In 2004 Hamish established his own company which focuses on enabling organisations to achieve breakthroughs by looking outside their current environment. Processes, product and people development are all part of this mix.

Hamish is a Fellow of the Chartered Institute of Bankers, a Fellow of the Chartered Institute of Transport, and was the Rail Professional Business Manager of the year in 1998 for his results at Eurostar. He chairs the EMEA advisory board for Emory University from whom he also received the “Sheth Distinguished International Alumnus” award. Other recent awards include the Inspired Leaders Network award for the management of innovation. He is also a trustee of the Robert T Jones memorial scholarship and a non-executive Director of Chartered Brands, the Edinburgh based Brand realisation company.

Hamish has imparted his wisdom in the broadcast and written media, and has worked on Teen Canteen for the BBC.

“If you want a breakthrough … look outside your current environment”, says Hamish.

Hamish's highest profile cross-sector achievements qualify him to help guide businesses through times of change or challenge: British Airways put beds in their planes with the help of a yacht designer; Airport queuing was improved with the help of Disney, and Sainsburys Bank profits increased tenfold by using retail concepts rather than the traditional bank approach.

Hamish’s energetic, thought provoking and humorous keynotes are based on a rare combination of real stories and a fantastic ability to inspire audiences with tailored advice and practical tools. Regularly featured in broadcast media, today Hamish acts as an advisor to some of the world’s largest companies (and even Governments) assisting with specific innovation projects, customer focus and/or people leadership.

Hamish's blend of engaging delivery, mixed with real world examples from his impressive career make Hamish the ideal choice for any corporate event.

For further information or to book Hamish Taylor, call us at Speakers Corner on +44 (0)20 7607 7070 or email info@speakerscorner.co.uk

What people said about Hamish Taylor