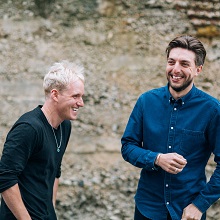 After deciding it was time someone stood up and challenged the big confectionary brands, star of Made in Chelsea, Jamie Laing together with Ed Williams founded Candy Kittens.

After deciding it was time someone stood up and challenged the big confectionary brands, star of Made in Chelsea, Jamie Laing together with Ed Williams founded Candy Kittens. A lot of people thought they were crazy (sometimes they still do!), but they spent the next 18 months developing that idea to create a gourmet sweet like no other.

Since launching the company in 2012, they have successfully built a brand that has made its mark on the confectionary industry, and the consciousness of millennial consumers up and down the country. Dedicated to creating an innovative, gourmet sweet range the pair bring with them a unique mix of skills that has allowed them to take on some of the biggest names in food & drink. Alongside Candy Kittens, Jamie’s on-screen profile provided the perfect marketing platform from which to launch the brand. Ed is an entrepreneurial marketeer who is obsessed by brand. Coming from a design background, he has the ability to spot trends and quickly turn new opportunities into commercial value. Ed’s decisive, positive management has delivered 100% growth for the last three years running. Together, they are completely dedicated to make Candy Kittens a household name.

The brand has secured nationwide distribution with major retailers including with Tesco, Waitrose, and Sainsbury’s. Alongside their commercial achievement, Candy Kittens has defined itself as a social influencer in its own right. The brand has a clear voice across London and within the wider fashion industry. With the company’s focus on quality and steadfast effort to understand their customers, Candy Kittens have paved the way in creating an unrivalled customer experience.

Proving to be a massive hit on the corpoate circuit, Jamie and Ed are entertaining audiences with their keynote speeches and panel discussions. As an added bonus they can usually be persuaded to bring some of their products to share!