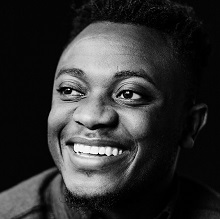 Michel Chikwanine has experienced the savagery of war a first hand and has undergone unimaginable suffering. His strength and belief that ordinary people can make a difference inspire audiences around the world, making Michel an incredibly in demand motivational speaker.

A former child soldier, Michel Chikwanine has already endured and overcome unimaginable pain and struggles. His passion and belief in the possibility for change makes him a truly remarkable individual and humanitarian and an exceptional and inspirational keynote speaker.

Born in the Democratic Republic of Congo, Michel grew up amid the terror of the Great War of Africa. He witnessed the torture of his father, who was singled out for his political beliefs, the rape of his mother and endured torture of his own. Much of Michel’s childhood was ravaged by the death and decay of a war that claimed the lives of 3.8 million people, his father included.

Forced to leave his home as a refugee at the age of 11, Michel has since travelled to many African countries, witnessing first-hand the problems facing the developing world, but also the beauty of the communities and people who live there.

Michel graduated from St. Patrick’s High School in Ottawa, where he won the Mousa Abdel-Hussein Memorial Award for supporting multiculturalism. He also won the Spirit of the Capital Youth Award for Personal Courage.

Today, Michel is an accomplished motivational speaker, addressing audiences across North America. He has spoken to over 100,000 people and was also on Oprah’s O Ambassadors Roots of Action speaking tour, which largely reached students at resource-poor schools. Sharing his personal story, Michel has captured the attention of national media, including CBC, CTV and major daily newspapers as he inspires people to believe in their ability to create change.

Michel's speaking topics include: A Journey to Hope: From Child Soldier to Activist, How Resiliency Helps Overcome Adversity, How Canadian Diversity Helped Me Succeed, Courage to Overcome Fear, Leadership and The Story of Refugee to Author: My Canadian Journey.

Michel leaves audiences with a new perspective on life, a sense of hope through social responsibility and a desire for change through his positivity in enacting change. His first-hand understanding of the impact of conflict on children and ability to understand social issues from a local and global perspective makes him an ideal speaker to bring across these important issues to global audiences.

What people said about Michel Chikwanine