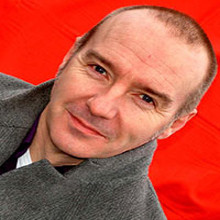 Synonymous with Band Aid, Live Aid, and tireless charity work, Midge Ure's commitment campaigning to ensure better lives for those in poverty have earnt him an OBE. In his candid and moving speeches, Midge Ure communicates details about his career, and of course the story of how musicians came together to try and change the world.

Ivor Novello and Grammy winning singer, songwriter, director, philanthropist and icon, Midge Ure is one of Scotland’s most famous personalities .

Midge Ure’s initial decade of stardom saw him sing with Thin Lizzy; Ultravox; Slik and The Rich Kids as well as Band Aid. Knocking Abba’s Mamma Mia off the number 1 spot in 1976, Slik’s Forever and Ever became a legendary single, and paved the way for consistent chart domination. In 1979 Midge was snapped up to become Ultravox’s new frontman, and became an icon of the 80s romantic and electro-pop movement. They produced seven consecutive top ten albums in six years.

Not only front of stage, Midge’s musical direction was award-winning. Videos for Bananarama and Fun Boy Three, and directing a series of rock concerts for The Prince's Trust, Wicked Women for Breakthrough and in honour of Nelson Mandela, Midge firmly established himself as a talented businessman as well as musician.

On November 25, 1984, 36 artists under the Band Aid umbrella, and under the direction of Midge, recorded Do They Know It’s Christmas?, which he wrote with Bob Geldof. The single sold 600,000 copies in its first week in the UK, and 800,000 more were bought in the second week. Ultimately over 3 million were sold all over the world, contributing hugely to the Ethiopian Famine Relief raising a staggering £8 million.

Propelled by the Band Aid success, Midge eased himself back into the charts, this time under his own name with a number 1 single and a no 2 album, The Gift, and a 22 date tour.

His next album in 1996, Breathe, sold over half a million copies in Europe alone.

In 2001 he appeared on This Is Your Life, and then released The Very Best Of Midge Ure and Ultravox, which led to a tour and a dvd release, as well as the launch of www.midgeure.com, and online forum for him to release him own products under his own name.

His Sampled, Looped and Trigger Happy tour was followed by an acoustic tour of Europe, and his autobiography hit bookshops.

Midge executive produced the Band Aid 20 single, and in 2005 was awarded an OBE.

He talks candidly about his career and what Live Aid and the Live 8 concerts mean to him. He explains how the musicians aimed to convince the eight world leaders to focus on fighting poverty in the third world. He is a charismatic and affable personality, and speaks emotionally and openly in his moving presentations.