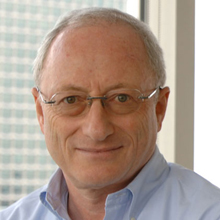 Former head of Granda TV, Steve Morris set up te Creative Entrepenuers forum, and is an expert on media and sits as Chairman of All3Media. Steve has chaired a Government Task Force on e-learning, and has been a Governor and Non-Executive Director at the British Film Institute, British Screen, British Film Commission and the National Film and Television School.

Former head of Granada TV and non-exec chairman of All3Media, Steve Morrison set up the Creative Entrepreneurs Foundation, and is one of the UK's foremost business  and media experts.

Steve is widely recognised as the man who took Granada TV on its journey from a British regional TV channel to Europe’s primary commercial programme producer and as the centralizing force of ITV, the biggest commercial media company in the UK.

As the first graduate of The National Film School, Steve embarked on a media career as a promising and talented radio producer at BBC Scotland. Joining Granada in 1974, he spent almost a decade climbing the ranks before founding Granada Films, which he headed up and where he filled various senior roles from Director of Programmes to MD.

Moving on to become MD of LWT in 1994, he doubled the company’s profits in two years, and acquired ITV’s major producer-broadcasters; LWT, Yorkshire and United – all of whom thrived and grew under his leadership.

Steve’s plaudits include an RTS award for World In Action; a BAFTA for 28-Up; two Oscars for My Left Foot; an Oscar nomination for The Field and adulation for British Comedy classic Jack and Sarah. Granada shows such as Cracker, Prime Suspect and Cold Feet placed the company at the heart of British entertainment.

Steve has chaired a Government Task Force on e-learning, and has served on the founding Board of Teachers TV. He has also been a Governor and Non-Executive Director at the British Film Institute, British Screen, British Film Commission and the National Film and Television School, and was Chairman of Vision and Media, the cluster organisation for the creative industries in the North West of England.

In 2015 Steve was confirmed as Rector of Edinburgh University.