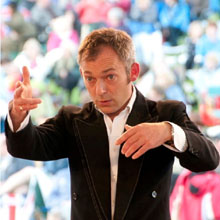 Internationally-renowned conductor, motivational speaker and after dinner host, Charles Hazlewood has won hearts and minds around world with his ground-breaking musical projects. Moving audiences to laughter and occasionally tears, his presentations on leadership, trust, creativity and change have inspired leading organisations including Google, the US Federal Reserve, Mulberry and TED.

C: £5K - £10K
"A brilliant speaker that captivated and engaged the audience the whole way through. He drew on experiences to bring a completely different perspective to our day to day work. Highly recommended and given the opportunity I would definitely use Charles again."
Hilton Worldwide
Teamwork, Arts & Culture, Business, Innovation, Leadership Motivational Speakers, Keynote Speakers, After Dinner Speakers

Charismatic, entertaining and inspiring, Charles Hazlewood is a globally-renowned orchestra conductor on a mission: to expose the role that music can play in all our lives.

An engaging  motivational speaker  and after dinner host , Charles imbues listeners with a sense of new possibilities and refreshed energy (and pleasantly surprised at their singing voice).

He can 'riff' on almost any subject and relate it to music , tailoring his anecdotal, interactive presentations to the composition and contexts of each audience – in one performance, he will engage in a conversation with the crowd; in another, he will blend film, sculpture or movement into a piece.

‘Opening the mind to music opens possibilities,’ chimes the innovative conductor, arguably the  Heston Blumenthal  of his field.

Sharing the highs and lows of his career, which has taken him around the world with some of the finest orchestras, Charles attributes his success to his creative leadership style, eschewing the dictator model of conducting orchestral music and reinventing the genre along the way.

After graduating from Oxford University where he was an organ scholar, he was determined to blow the dust off the set-up of a traditional symphony orchestra: dismissing wordy programme notes and stuffy concert halls, he began to chat about the ‘ingredients’ of music – all kinds including jazz and pop - and explain why it is worth playing.

He strives to prove that music – the most universal language we have as a species - can overcome barriers of class and culture. Indeed, he has led numerous ground-breaking musical projects, including his unique opera company of untrained singers from the poorest South African township: although derided at the time, the project ultimately garnered international awards and acclaim.

Charles also founded the first orchestra of disabled musicians—the paraorchestra—which performed alongside Coldplay at the closing ceremony of the London 2012 Olympic and Paralympic games, and to the European Parliament and Barack Obama in 2014. They continue to tour around the globe in order to demonstrate the incredible creative talent of disabled people.

In 2008, he launched the 'Charles Hazlewood All Stars' at Glastonbury Festival, and, the following year, he made his conducting debuts with the Royal Concertgebouw in Amsterdam, the Orchestra of the Age of Enlightenment in London, and the Malmo Symphony in Sweden. He also records and tours with his own orchestras, Excellent Device, and the Army of Generals.

As well as speaking at  TED Global  and TEDx , he is a familiar figure on British television, including several landmark series on composers. He occupies a central position on BBC Radio 3, with Discovering Music, where he deconstructs great orchestral music, and explores his vast and catholic music tastes on Radio 2's The Charles Hazlewood Show.

- The benefits of music: trust, teamwork, creativity, confidence and well-being

- Leading the perfect performance: what does a conductor do except wave his hands about?

- Making music around the globe: the universal language

Charles Hazlewood In Conversation with Nick

An exclusive video with Charles Hazlewood

What people said about Charles Hazlewood