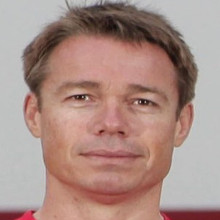 Former professional English football player, Graeme Le Saux successfully transitioned to become a pundit. Graeme works on the BBC Match of the Day 2 highlights show and the BBC Radio 5 Live station, offering his well-informed options on the game. A clear and professional speaker, Graeme is a perfect after dinner speaker, sure to entertain audiences with anedotes from his successful sporting career.

Graeme Le Saux is a strong corporate motivational speaker on ‘The Business of Football’. He is extremely intelligent and one of the most gifted and articulate footballers of his generation.  Graeme is also a successful TV and radio pundit and presenter.

Graeme is a former England international footballer who played most of his career as a left-back, though his pace and skill enabled him to move into a left sided midfield role when required.

Graeme made his England debut in a 1994 friendly against Denmark, going on to represent his country 36 times. The highlight of his England career was representing his country in the 1998 World Cup.

Graeme started his career at St Paul’s (Jersey) before moving to Chelsea in 1987. In 1993 he switched to Blackburn Rovers where he won the 1995 Premier League title with Blackburn. In August 1997, Graeme became the most expensive defender in English football when he returned to Chelsea in a £5million deal. He remained there for six seasons before moved to Southampton. Graeme played at St. Mary’s for two seasons before announcing his retirement in May 2005 following Southampton’s relegation.

Since his retirement, Graeme has enjoyed punditry and co-commentary roles on TV and Radio. He has also proved to be a popular choice on the corporate speaking circuit with his ‘The Business of Football’ package. Graeme talks about his early days on the pitch and lessons that he has learnt. He transfers all the skills and tips from the footballing world into concise and adaptable tools for the business market.

Graeme was involved in visiting Delhi alongside the former Mayor of London Ken Livingstone to promote business, tourism, culture and sport between the capital and India. He unveiled Delhi’s very own replica of ‘Big Ben’ representing a tourism agreement between the two cities. Both Graeme and Chelsea chief executive Peter Kenyon, were in high demand from India’s press pack, discussing the Premier League and football in India.

Also since leaving the pitch, Graeme has enjoyed the success of authorship, TV and radio appearances and successful work as a pundit. In 2009, Graeme appeared on ITV's Dancing on Ice, and he has also written numerous articles for The Telegraph newspaper amongst others. 2010 also saw the development of the Graeme Le Saux 2010 Football Programmes.

An erudite speaker, Graeme can transfer the success of the football pitch into the business world, leaving delegates with interesting insights and takeaway tips.