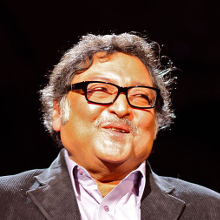 ‘Global Education Superstar’ (The Times), Dr. Sugata Mitra has been a successful researcher in cognitive science, educational technology and physics for more than 30 years. The global consequences of Sugata's discovery for closing the digital educational divide have resulted in him receiving many international awards, and his work inspired the Oscar-winning film ‘Slumdog Millionaire’.

Professor of Educational Technology at Newcastle University in the UK and Visiting Professor at MIT in the US, the global consequences of Dr. Sugata Mitra’s discoveries for closing the digital educational divide  have earned him numerous international awards.

The educational researcher holds a PhD in theoretical Solid State Physics. As well as Physics and Energy, he has been working in the areas of Cognitive Science , Information Science and Educational Technology for more than 30 years.

Described by The Times as a ‘Global Education Superstar’, Sugata’s work was the inspiration behind the book ‘Slumdog Millionaire’, which went on to become an Oscar-winning film in 2009.

His ‘Hole in the Wall’ experiments have shown that, in the absence of supervision or formal teaching, children can teach themselves and each other, if they’re motivated by curiosity and peer interest.

In 1999, Sugata dug a hole in a wall bordering an urban slum in Delhi, installed an internet-connected PC, and left it there (with a hidden camera filming the area). What they saw were kids from the slum playing around with the computer and in the process learning how to use it and how to go online, and then teaching each other.

In the following years, they replicated the experiment in other parts of India, urban and rural, with similar results, challenging some of the key assumptions of formal education.

Sugata's conclusions on Self-Organised Learning Environments (SOLEs) reveal that, when given access to the Internet and left unsupervised, groups of children can achieve educational objectives by themselves, show self-organising behaviour resulting in learning in ‘minimally invasive’ environments, and understand content years ahead of their time.

His ‘Hole in the Wall’ discovery is provoking the design of hardware and software that enable children to reach the intermediate to expert level entirely on their own. His current research is leading towards an alternative primary education using self-organised learning, mediation and assessment environments.

As well as building a stand-alone SOLE where children can learn without physical teachers, Sugata is working on organising retired teachers (sometimes referred to as the ‘Granny Cloud’ or as eMediators) to connect with children remotely, using peer-to-peer video communication such as Skype. This is based on evidence that children in remote areas show poorer school performance, usually due to the quality of instruction they receive (good teachers tend to migrate away from remote areas).

At TED2013, he made a bold TED Prize wish: Help me build a place where children can explore and learn on their own, and teach one another, using resources from the worldwide cloud.