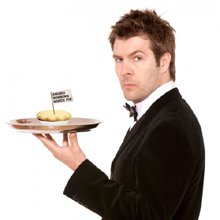 Welsh sensation Rhod exploded recently onto the comedy scene, winning an unprecedented number of awards within his first eighteen months as a stand-up. He now regularly headlines across the world and has very quickly emerged as one of the most exciting and original talents on the UK scene.

Welsh sensation Rhod Gilbert exploded onto the comedy scene back in 2002, winning an unprecedented number of awards within his first eighteen months as a stand-up. Since, he has headlined international gigs, established himself as a star of TV, radio and a brilliant writer. His hosting of the BBC2 show You’re Fired – The Apprentice Spin off combined with his hilarious appearances on mainstream panel shows such as ‘Never Mind the Buzzcocks’ has seen him cement his name on the comedy circuit.

Rhod was nominated for ‘Chortle Best Headliner’ in 2009, and was named in the Times ‘Top 50 Comedians’ poll and ‘Top 50 Icons’ in the ‘Rough Guide to British Cult Comedy’ alongside comedy legends including Eddie Izzard, Lee Evans, Johnny Vegas, Harry Enfield and Paul Merton.

Rhod is also a hugely popular and busy comedian on the corporate circuit, particularly in his beloved Wales.

His hotly anticipated debut show ‘Rhod Gilbert’s 1984’ made a huge splash at the Edinburgh Festival in 2005 earning him nominations for both the prestigious 'Perrier Newcomer Award' and 'The List Festival Writers Guild Award'. Building on his reputation as a first-class live act, his follow-up shows: ‘Knocking on Heaven’s Door’ (2006) and ‘Who’s Eaten Gilbert’s Grape?’ (2007) were also critically acclaimed, total sell out hits in Edinburgh with extra shows added due to public demand, and both culminated in nationwide tours. Rhod's show ‘Rhod Gilbert & The Award-Winning Mince Pie’, performed at Edinburgh in 2008, was followed by a nationwide tour.

2012 saw Rhod be invited to perform at ‘The Royal Variety Performance’ for the second time, joining an incredible line-up of other esteemed performers.

Not just a natural on our TV screens, Rhod is making huge waves in the world of radio. He has earned a nomination for ‘Best Radio Personality’ at the Celtic Media Festival Awards for Rhod Gilbert on Saturday. He presented a series of comedy quiz show Just A Minute, which also achieved great acclaim!

Rhod’s international profile has also continued to soar and since he broke onto the scene, and he has been invited to perform at every major international festival in the world including Adelaide, Sydney, Melbourne, Montreal, New Zealand and Cape Town.

Following success as a stand-up, TV and radio personality, Rhod was selected to be the ‘Voice of Wales’ and can be heard representing his country in the Welsh Tourist Board’s national television advertising campaign. He has also recently written and voiced ‘TV Gaffes Galore’ and ‘Football Gaffes Galore’, for BBC Three.

Rhod continues to light up our screens on countless comedy panel shows and in ‘The Apprentice’ spin-off series ‘You’re Fired’, he is an exciting talent and his side-splitting rumour coupled with his hosting experience make him the perfect choice for live events and awards ceremonies.